Scott, the treasurer of Team Solidarity for the union, has been first a bus monitor and then a bus driver for 20 years. In 1965, when Scott was only nine years old, she participated in the historic “Bloody Sunday” march for voting rights over the Edmund Pettus Bridge in Selma, Ala., where she was born. 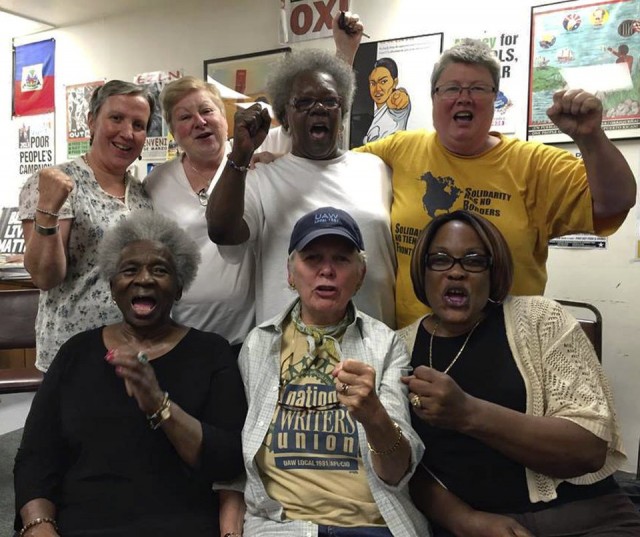 Workers World: How does Selma connect to your struggle today as a bus driver?

Georgia Scott: This is the same struggle as 1965 in Selma. Schools were limited — all Black, all white. The education system did not work for people of color. We didn’t have the books, the tools we needed. There were places we weren’t allowed to go because of our color, like in the movies, in restaurants. There were neighborhoods we weren’t allowed to go into. The purpose of the movement was to give us the same rights as all the other people.

Right now in Boston our children can go to school where they need to go to meet their needs. I did not have that opportunity growing up. Veolia cutting back on the buses, that will limit our children, their safety and their choices of education.

The fight in Selma is the same fight as now.

WW: How do monitors and drivers help keep the children safe?

We are the safety zone for the children.

WW: Why is this union a social justice union — fighting also for other people, marching with people for Palestine, for LGBT rights and so forth?

GS: I think we are all born with the will to resist. For me it comes with being born and raised in Alabama. My mother was on that bridge too, and I learned from her.

I also think for this union it goes back to the 1974 busing struggle [against segregation] when the drivers were transporting our children into South Boston where they weren’t wanted. The drivers that came on board had the mentality of standing firm and being strong, knowing that the things going on were wrong.

This union is based on listening, going out into the community, listening to the parents, building on that, and needing to struggle.

WW: Some in the union are from Cape Verde and fought for liberation from Portuguese colonization, and many in this majority Haitian union are part of the struggle against imperialism in Haiti with Fanmi Lavalas.

GS:  Our strength could also be we are a mixed group of people, from all walks of life. We’ve had different struggles. From being in the union, I’ve learned how to fight.

Sitting at the table with Transdev in particular — I call it Trans-devil! — I’m looking across the table at one of them with a smirk on his face. He is dealing with thousands of children. There is nothing funny about talking about children on the street corner, and then boxing drivers in about the children’s safety.

WW: How is Veolia/Transdev changing the way it computes your pay?

GS: The hours we are paid for are the hours listed as the time it takes to drive a route — the flat rate.

The flat rate, before Veolia put in the telematics system, was computed by experienced people who knew the specific routes on the road. They knew how long it really took to drive that particular route.

Arbitration ruled against the use of GPS for the creation and re-evaluation of flat rates, but the company is still illegally using it every day.

Now that the company is using GPS to compute the flat rate, the time they allow on routes is shorter and impossible. It doesn’t allow for fire trucks, accidents, emergencies on the bus. Or enough time to stop, get the child across, take a seat, get a seat belt on. They allow half a minute for that.

We have to be able to take care of whatever is going on, and be paid for that. For instance, last year it was so cold, there was ice inside my bus. I told dispatch I was not going to move until I warmed the bus up for the children.

But management said to me “Oh no, just go, put the kids on, and go“ — in a bus with ice inside!

I said no! I’m saying no to a lot of things this company is ordering.

WW: I heard Veolia/Transdev tried to make the drivers reapply for their jobs when the company took over.

GS: Most of us, 95 percent, did not do the new hire application — one of the first things the company asked for. We said we are not new employees, the company is new. If anyone should do a new application, it should be the company — and if they had applied to us, they would not have gotten the job!

WW: Why do workers need a union?

GS: My brother is still in Selma. He’s 57 years old, worked at a hospital in the kitchen, in and out of the freezer. He developed arthritis, and the doctor put him on medical leave. The company fired him. Twenty years on the job. No union, no support, no protection!

Now he’s working at a laundry. I went home and rode out to his workplace to have lunch with him. My brother told me he almost could not get away to go out with me. The company policy is: “You can’t have people coming here on the job.”

That’s what these big corporate conglomerates want, to control us. They’ve got the power and the money.

One person standing alone has no power. All of us together, that’s our strength.

I know the importance of the union. This is not just about Boston. It’s going on in the rest of the county, and it’s a global issue.

So I’m going to fight for the union!

For more information, go to workers.org and search for “Boston school bus drivers step up the fight.”