The reactionary Justice and Development Party (AKP) government of Turkey, led by President Recep Tayyip Erdogan, began a military offensive on July 24 against the Kurdish Workers Party (PKK) and against people of Kurdish origin throughout the geographical area of Turkey, Syria and Iraq.  Another primary target of this offensive is Syria’s government. 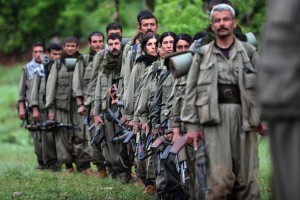 The Turkish regime has also arrested 1,200 people within Turkey, charging them with “suspicion of terrorism.” Most are from Kurdish and/or leftist groups. A Turkish politician from the AKP’s rival capitalist Republican People’s Party (CHP), Faruk Logoglu, said, “The true target of the AKP regime is not the I.S., but the PKK.” (Junge Welt, Aug. 3) The PKK has been defending Kurdish regions against Turkey’s army with a guerrilla war since 1984.

U.S. imperialism and its NATO military alliance has given the Turkish offensive its full political, diplomatic and military support. The Turkish regime is now allowing the Pentagon to use Turkish airbases at Incirlik and Diyarbakir in the southeast of the country to carry out bombing attacks in Iraq and Syria. In return, the U.S. and NATO are allowing Turkey to set up a “buffer zone” inside Syria in Rojava province.

Turkey has been a NATO member since 1952, after its armed forces intervened under U.S. command against the Democratic People’s Republic of Korea. Washington sends more military aid to Turkey’s armed forces — second in size in NATO only to the U.S. — than to any other countries except Israel and Egypt.

Through most of the post World War II period, Turkey had its closest military ties to U.S. imperialism and closest economic ties to Western Germany. Currently, Turkey does significant trading with Russia and China. About 3 million people of Turkish background, including Kurds, live and work in Germany now as second-class residents, and Germany’s arms industry sends weapons to Turkey.

The pretext for Turkish aggression is the alleged war against the Islamic State. It is also the pretext for U.S. and NATO support and for the Pentagon intervention in Syria and Iraq.

Since the war within Syria opened up in 2011, the Turkish regime has supported and armed those forces fighting the Bashar al-Assad government, including the reactionary Islamic forces like the Islamic State. Only after the Islamic State opened a successful offensive in Iraq in 2014 and Washington designated this group as an enemy did Ankara even try to hide its support.

The first step leading to Erdogan’s offensive against the Kurdish movements throughout the region and against the left within Turkey was the surprising setback for his party in the June elections. Hoping to win 60 percent of the seats in parliament, the AKP instead lost its majority and won only 258 of the 550 seats. A new leftist coalition party, the Peoples Democratic Party (HDP), with much support from the Kurdish population won 13 percent of the votes and 79 seats.

What had boosted the mood among Kurds and left forces in Turkey just before the election was the military victory by armed, mostly Kurdish elements against the Islamic State in the town of Kobane in the Kurdish region of northern Syria. Women played an active role among the Kurdish fighters of the PKK and its Syrian sister party. The popular liberation fighters became a rallying point for leftists all over Turkey and among European communists.

Because of the severe damage in Kobane, progressive youth were rallying on July 22 in Suruç, Turkey, just six miles from the town in Syria, planning to go there to reconstruct buildings for Kobane’s youth.

As Workers World warned in its June 21 article reporting on Turkey’s June 7 national election, “The Turkish police, intelligence services and the massive armed forces, with nearly 700,000 personnel and with close ties to both the U.S. and German armed forces, are still the power behind the electoral façade.” It took only a month for Erdogan to move in the direction of using the repressive apparatus of the state to reverse his electoral defeat.

The rally in Suruç was hit by a suicide bomber, allegedly an operative of the Islamic State, which left 32 of the socialist youth dead. Many suspected the hand of the Turkish political police in arranging or allowing the bombing to take place. This suspicion grew as Erdogan used the terror attack on a left group as a pretext to arrest 1,300 people, all but 140 of whom were leftists, and accuse them of terrorism, as well as to launch the bombing attacks.

In Iraq, the Turkish Air Force described its targets in Iraq not as the Islamic State but as “PKK camps.” The official state Anatolia news agency claimed that the airstrikes had killed 260 and wounded 400 PKK fighters in Turkey and northern Iraq as of July 30, including the brother of the co-chairperson of the HDP.

It is common for oppressive forces to exaggerate their military successes, just as the U.S. did in Vietnam. The PKK response was that they had few casualties among fighters but that many civilians, including children, were killed in the northern Iraq town of Zergele.