The Embassy of Bolivarian Venezuela inaugurated the Hugo Chávez Library in Washington on July 31, the week marking what would have been the late president’s sixty-first birthday. The new library reflects the contributions of Chávez’s visionary leadership in advancing continental integration and development, and empowering the most oppressed and marginalized sectors of Venezuelan society. 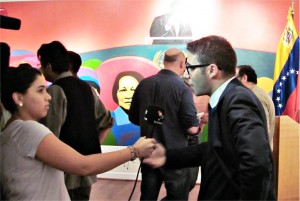 The program featured Oliver Stone’s film “My Friend Hugo,” with glimpses of Chávez’s energy, warmth and reciprocal love with the red clad masses — men, women and children. Remarks by Ambassador Designate Maximilien Sánchez Arvelaiz explained how the library’s photo displays of Chávez with many authors highlight his love of reading and books.

A spectacular mural, spanning a whole wall and painted collectively, depicts Chávez at the United Nations with an internationalist representation of people from around the world. An Iranian woman in the audience commented on the longstanding friendship between Iran and Bolivarian Venezuela.

The new Chávez Library refutes U.S. imperialism’s demonization and justification for sanctions against Bolivarian Venezuela.  A brochure on social programs published by the Embassy of the Bolivarian Republic of Venezuela in the U.S. describes the new reality. It states: “In the past, Venezuela’s oil wealth benefited a few. Today, it benefits a few million.” These benefits include social programs for health, education, nutrition and human rights, covering Indigenous people, people of African descent and workers in general. Also guaranteed are gender equality and the right of every person to vote. 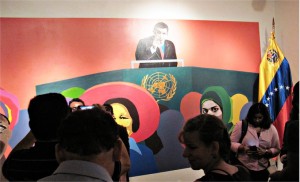 Chávez’s leadership in continental integration through the Bolivarian Alliance for the Peoples of Our America — initiated together with Cuba’s former president Fidel Castro, the Community of Latin American and Caribbean States, and other formations — was an important factor changing the U.S. posture toward revolutionary Cuba to begin direct talks and re-establish embassies.

Although the library is a work in progress and currently open only by appointment, it is already an important source for information about Chávez and the Bolivarian process that continues today.