From July 20 to 25, there was only one day when New Jersey Transit’s service to Penn Station in New York City was not disrupted. Tens of thousands of workers were delayed in getting to work and again in getting home.

The reason for the delays was dilapidation of the electrical system in the tunnels that bring NJ Transit and Amtrak trains in and out of New York. These tunnels, built by Pennsylvania Railroad between 1904 and 1908, were severely damaged in 2012 by superstorm Sandy. Salty seawater ate away at the concrete walls containing the electric lines. 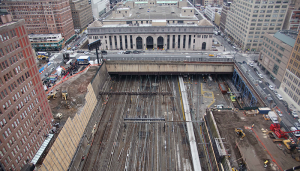 For Sandy’s damage to be fixed, not just patched, the tunnels would have to be taken out of service one at a time, which would reduce their capacity to a quarter of what it currently is. Instead of 23 trains per hour moving during rush hour, there would be five or six.

The Northeast Corridor Infrastructure and Operations Advisory Commission estimates that if both these North Hudson tunnels were to go out of service, it would cost the economy $100 million a day. Most of this cost would be borne by workers who couldn’t get to work or return home, since very little freight moves through these tunnels.

Secretary of Transportation Anthony Foxx, on a trip to New York during NJ Transit’s problems, called the failure to repair the tunnels “almost criminal” and said their possible failure was the biggest current threat to the country’s infrastructure. (Politico, July 21)

The issue of the tunnels’ repair is caught up in Republican primary politics. One of the first things Gov. Chris Christie did when he took over in 2010 was to cancel a tunnel project designed to build a new tunnel from New Jersey to Manhattan.

Christie claimed that New Jersey would have to shoulder too much of the cost. His decision also freed up $3 billion from the Port Authority of New York and New Jersey, which he then allocated to repair roads and bridges that were in a state of decay. That’s because New Jersey uses its gasoline tax to pay for their upkeep and Christie has refused to raise the gas tax.

Whether or not Christie is right, governors, mayors and transportation secretaries throughout the United States all point to some other entity, led by somebody who is not a political or financial backer of their administration, as being responsible for maintaining and improving crumbling infrastructure.

For example, the tunnels under the Hudson River are a key part of the Northeast Corridor Rail System stretching from Richmond, Va., to Boston. If they collapse — a not-impossible outcome given their neglect — the million or so people who use this corridor every day in a number of states will be severely affected.

And of course the workers who use this infrastructure are having their standard of living frittered away as it crumbles. They are suffering from a disguised form of austerity that only becomes visible when tolls or fares go up. NJ Transit is raising its fares by 9 percent starting Oct. 1.

Workers have a need and a right to a safe and effective infrastructure. They don’t need a capitalist political system that shrugs off their needs and tries to shift the costs of infrastructure maintenance onto their shoulders.