Houston — How can someone, whose only mistake is to forget to use her car’s turn signal when changing lanes, wind up dead in a county jail just a few days later, with a medical examiner calling it suicide?

People from coast to coast are asking that question. 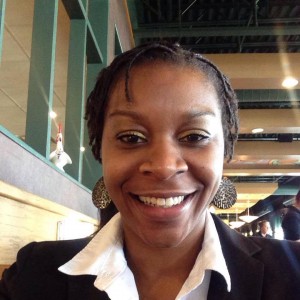 Sandra Bland, a 28-year-old African-American woman, drove from her home in a Chicago suburb to Prairie View A&M University, her alma mater in rural southeast Texas, to begin a new job as a student ambassador to the alumni association. She called it her dream job.

Bland was found hanging with a trash bag around her neck in a Waller County Jail cell in Hempstead, Texas, on July 13.

There have been almost daily protests, vigils, rallies and/or marches since the news broke.

On July 17, this writer joined hundreds who protested at the jail and then marched to the Waller County Courthouse. There a rally was chaired by Kofi Taharka, chair of the National Black United Front. Anti-racist activists from Houston and Austin were joined by local residents of Hempstead, Waller’s county seat of just over 40,000 people where 60 percent are white and 30 percent are Black. Speakers included friends of Bland, a sorority sister, PVAM alums and outraged activists.

A few of women from Hempstead who were unable to march set up a card table at the jail, offering free cheese sandwiches and sweet tea for  protesters. One woman, who goes by Jen Jen, said she was 49 years old and could give 49 reasons why no one should ever want to find themselves inside the jail. “The last time I was picked up I was beaten black and blue, with splotches darker than this skin you see today.”

When asked what she was charged with, Jen Jen responded, “Oh, the cops didn’t charge me. After they beat me, they let me go, that’s all. And you don’t even want to hear the stories about things that happen right inside these walls,” she said, pointing to the Waller County Jail. 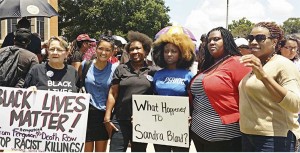 On July 19, PVAM students gathered at the school’s fountain to remember and honor Bland. PVAM was founded in 1876 when the Alta Vista plantation near Hempstead was bought and turned into what is now the second oldest state-funded school of higher education in Texas.

Bland was already familiar with Texas and its horrific racist history. She graduated in 2009 from Prairie View, a historically Black university just 45 minutes from Houston.

Bland was active in condemning the deaths of Black people at the hands of cops, from Michael Brown in Ferguson, Mo., to Eric Garner in Staten Island, N.Y. She posted on Facebook about the danger from cops and even made videos condemning murders by police. Now her friends and supporters are tweeting at #SandraBland, #JusticeforSandy and #IfIDieInPoliceCustody.

Over the last year, exposure of U.S. cop killings of young Black people has escalated. In response, the Black Lives Matter movement is now active all over the country.

Texas has a sordid history of racist murders. In the early 1900s there were lynchings of Black people all over the state. Two of the most infamous were in Waco — of Allen Brooks in 1910 and Jesse Washington in 1916.

During Brooks’ trial, allegedly for assaulting a white child, an angry mob took him from his armed guards in the courtroom and hanged him from a pole at Elk’s Arch, reported the Dallas Morning News.

According to blogger Michael W. Waters, Washington was castrated, his fingers cut off, and his body lowered and raised over a fire for two hours before being dragged through town. His body parts were later sold as souvenirs. (Huffington Post, July 17)

In recent decades the cops in every major city in Texas have murdered and maimed African Americans — including Black Panther leader Carl Hampton in Houston in 1970.

Nationally, there is now a list of women who go with the Michael Browns and Eric Garners killed by the cops: Sandra Bland, Kindra Darnell Chapman, Tanisha Anderson, Yvette Smith, Rekia Boyd and seven-year-old Aiyana Stanley-Jones — to name a few.

Emily DePrang, writing in the progressive weekly The Texas Observer in 2014, noted that Houston cops are literally getting away with murder. She wrote that between 2007 and 2012, according to Houston Police Department records, deadly police shootings happen in Houston on average of one every three weeks. Every shooting by a HPD officer is investigated by HPD’s Internal Affairs and Homicide divisions.

DePrang writes, “Every killing was ruled justified. Harris County (Houston) grand juries have cleared HPD officers for on-duty shootings almost 300 times in a row. No Houston officer has been indicted for a shooting in a decade.”

In Texas, the saying goes, “Everything’s bigger in Texas!” The saying is true when it comes to the legacy of lynchings and the number of killer cops. Texas is also number one in uninsured people, and it executes more people than the next eight states combined. However, Texas is near the very bottom in funding education.

In one year’s time, three instances of terrorizing Black women in Texas have become national news.

Last August, cops pulled over Kametra Barbour and her four young children  and held them at gunpoint in Forney. Neither the car nor the passengers matched the description given to police in a 911 dispatch.

In June near Dallas, 15-year-old Dajerria Becton was thrown down, her head shoved to the ground, and she was held down by a McKinney cop’s knee after a pool party.

And now, Sandra Bland, stopped for failure to use her traffic signal and arrested in Waller County while en route to begin her new job, was found lynched in jail under suspicious circumstances a few days later.

How someone can go from driving to a new job to dead in jail in a matter of days is unfathomable — except perhaps for African Americans in Texas. Black activists often point out that driving while Black can be a capital offense in Texas, resulting in an unofficial, on-the-spot death penalty.

More protests, vigils and demonstrations are planned for Sandra Bland as communities await the results of her family’s independent autopsy. Many questions must still be answered. Those who are involved in the anti-racist movement have absolutely no confidence in either the Texas Rangers or the FBI, which are now investigating Bland’s death. Outrage, sadness and determination to find justice will not dissipate easily, nor should it.

Rubac is a longtime spokesperson for the Texas Death Penalty Abolition Movement in Houston.