Workers World interviewed Maxim Chalenko, secretary of the Communist Party — Lugansk Regional Committee in the Lugansk People’s Republic (LC). Chalenko is a founder of the Forum of Communist, Socialist, Workers’, Environmental and Anti-Fascist Forces. He helped to organize the Donbass International Forum titled “Anti-Fascism, Internationalism, Solidarity” held on May 8 in Alchevsk. This is part I of the interview.

Workers World: Where did you grow up and go to school? How did you become involved in the communist movement? 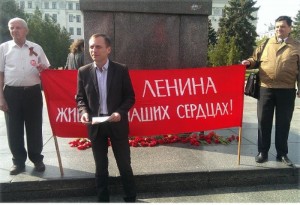 Maxim Chalenko: I was born on June 30, 1980, in Severodonetsk, in the Lugansk region [then part of Soviet Ukraine]. I spent most of my youth in Lugansk city, where my family moved in 1990. I graduated from Lugansk School Number 57, then East Ukrainian State University with a degree in history and archiving.

In Kiev, I was active in the movement “Ukraine without Kuchma” in 2002, when police violently broke up our tent camp. Later, I organized a series of protests of workers and miners in the Lugansk region.

WW: As a young person, what it was like to live through the collapse of the Soviet Union?

MC: As the son of a Soviet soldier, the collapse of the USSR hit me very hard. The destruction of this great country, whose cornerstone was to protect the workers’ interests, made many in the military burn with a desire to defend the Soviet Union. But unfortunately, after the collapse, those actively serving in the military were forbidden to speak of the USSR.

Many communists began to focus their efforts and energy on trying to build a just, socialist society within the framework of the national states formed after the collapse of the Soviet Union, including us in Ukraine. Perhaps this was one of the main reasons for our failures.

In my opinion, the disintegration of the Soviet Union into national states, which each went into its own sociopolitical process, only sped up the transition from the socialist to the capitalist path. A powerful, ideologically cohesive communist movement was then split and disorganized.

WW: Tell us about the activity of the communists in Lugansk following the U.S.-backed coup in Kiev in February 2014.

MC: After the anti-people coup in Kiev — and even during it, at the end of 2013 — we organized the first militia squadron to protect the civilian population of Lugansk from fascism. Our goals were to protect the population from aggression, provocations and attacks by neofascists, and to protect monuments related to our history and culture. We worked to block the arrival of neo-Nazi militants from the West.

We also took on the important task of opposing attempts by the Lugansk authorities to negotiate the conditions for their surrender to the Kiev junta. After all, capitalists in power are indifferent to the problems of the people; all that is important is to preserve and increase their capital. We understood this, and moreover, saw it happening in practice.

Powerful politicians, dominated by members of the Party of Regions, were negotiating the surrender of Lugansk to the neofascists. With the tacit consent of the Kiev junta, they appointed new regional heads of the Interior Ministry, Prosecutor’s Office and Security Service of Ukraine, whose purpose was to suppress the anti-fascist resistance in Lugansk.

We proposed to organize a broad anti-fascist front to stop the spread of fascism to the east and also raised the issue of geopolitical choice. At that time, the issue of the restoration of the USSR came to the fore.

In the face of resurgent fascist ideology, including aggressive nationalism, we must intensify international work to demand the restoration of the USSR. We believe that now more than ever we have the basis to do it.

WW: What organizing and activities have you conducted since the start of the war?

MC: In April and May 2014, Lugansk residents were very worried about Slavyansk [in neighboring Donetsk] and its inhabitants, who were subjected to Ukrainian military aggression. We organized the first collection and shipment of humanitarian aid from Lugansk to the defenders of Slavyansk. No one realized that in a month we ourselves would need help.

Later, when the war came to our door, we actively engaged in the collection and transfer of humanitarian aid to Lugansk from Russia. We were really helped by the Communist Party committees of Rostov and Voronezh. These two areas border Lugansk, and even before the war we had established a wonderful comradeship with them. We appealed for help and they immediately responded, organizing the collection of food, medicine and clothing through their party structures. Almost every week throughout the summer, we brought this assistance into the LC.

Then, in early September, when the ceasefire agreement was signed in Minsk, we held a reregistration of the party ranks and started to restore our party structures. Some people had left, some had disappeared and did not respond to phone calls. Several communists were killed. The secretaries of the party committees were scattered, mainly engaged in solving problems in their cities. At that time communication and transportation were restored, and within a few months, we restored ties with all local organizations.

WW: Why did you decide to organize an international solidarity forum this spring?

MC: There were two reasons: First, it was the landmark 70th anniversary of the victory of socialism over fascism [the Soviet defeat of Nazi Germany in World War II]; second, and most important, today the left wing in Donbass is in great need of international support and assistance from allied organizations.

In spite of high ideals, including our own, the movement of the People’s Republics along the socialist path has not been simple and unambiguous. Yes, at the initial stage, all the revolutionary movements of the streets and squares were associated with anti-fascism and the desire of the majority of the population to take the socialist path of development. But no one really voiced the slogans “factories to the workers” and “land to the peasants,” and the socialistic character of the republics remained only in form but not in essence.

The forum was significant in that it gave youth of Europe and the world an understanding of the conditions in which we are fighting today.

Next: The Donbass International Forum and the future of socialism in Lugansk