Jobless in a depression-era society, targeted by fascists like those in the Golden Dawn party and seeing benefits cut even for workers who are citizens, immigrant workers are near the bottom of Greek society, with perhaps only the refugees from ongoing wars below them. Immigrants find only the toughest jobs needing the least skills that pay little. Nearly all are excluded from Greek electoral life.

All workers in Greece need solidarity in their struggle against the big bankers of Europe and the United States. Greece’s migrant workers need an extra dose.

Because Greek workers also emigrate and the birthrate is low, immigrants help keep the population steady at nearly 11 million. Migrants make up about 8 percent of the total population and more than 10 percent of the workforce. Most come from neighboring Albania, with overall more than 80 percent from the Balkan states and the former USSR. The newest refugee surge is mainly from Syria and Afghanistan.

While all migrants face government repression and fascist xenophobia, a singularly savage assault took place in April 2013 against undocumented Bangladeshi and Pakistani agricultural workers who were hired to pick strawberries during the growing and harvesting season. This class attack aimed at robbing the workers’ wages. The ensuing legal case exposed xenophobia directed at South Asian workers.

The strawberry pickers were supposed to receive 22 euros per day, less six euros for room and board. But after five months’ work, they hadn’t been paid anything, so they refused to go on working. Three gangsters who had been overseeing the workers for the boss opened fire, injuring 35 workers, four critically.

In June 2014, despite union and anti-fascist demonstrations supporting the farmworkers, and a strong legal defense backed by left forces in Greece, a Greek court found the shooters not guilty. The Bangladeshi workers remain hungry and are being held in a camp. 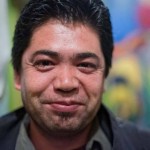 Before this January’s elections, a rightist government was in power. It built a fence blocking the Greek-Turkish border and ordered its Coast Guard to keep migrant ships out at sea. But this year, some 77,000 migrants have already landed in Greece by sea.

Nasim Lomani, an immigrant and member of the Network for Social Support for Refugees and Migrants, has lived 15 years in Greece. He told the German daily newspaper Junge Welt of July 11 that the Syriza government had ordered the Coast Guard to stand down from expelling the migrants, and that this order has held so far.

Lomani said, however, that despite the improvements since Syriza was elected, conditions are still terrible for the migrants. Near the town of Moria, on the island of Lesbos just off the Turkish coast, for example, there is a camp built to hold 250 refugees that is now housing 1,000. “What is gratifying,” he added, “is that unbelievably many of the islanders are taking care of the refugees in a way that shows their solidarity.”