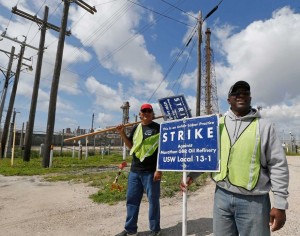 Members of Steelworkers Local 13-1 begin returning to work at Marathon Oil’s Galveston Bay Refinery (GBR) on July 6. After 143 days on the picket line and two contract rejections, on June 23 the Marathon strikers voted by a slim margin to accept a contract with improved safety language. The 1,200 workers were the last to ratify a contract in a strike that hit 15 facilities of several oil companies.

Involving 7,000 workers at its peak, the strike began Feb. 1, with safety as the overriding issue. The United Steelworkers International called the unfair labor practice strike after the lead industry negotiator, Shell, refused to bargain in good faith over job elimination and excessive overtime that was causing frequent injuries and even fatalities.

Between March and May, locals in the Midwest, Southwest and on the West Coast ratified local contracts. The corresponding return-to-work agreements delay, over a period of weeks, the time from when the strike pickets came down to when union members were back on the job. Some Marathon strikers will not start earning a paycheck until July 18.

The safety record of GBR, located in Texas City, near Houston, explains why the strike there lasted the longest. There have been 35 fatalities in 35 years, including 15 workers killed in a 2005 explosion. The union then negotiated stronger safety protections from BP, the owner of GBR at the time. Marathon’s desire to gut these protections, using the reasoning that, “It wasn’t us, it was BP,” is a major reason why Local 13-1 rejected the company’s two previous offers by a wide margin.

Just last year, an explosion at GBR left a worker critically injured. During the course of the strike, picketers observed several fires and there have been two incidents this year that led to the release of 128,000 pounds of toxic silica and aluminum oxide into the local community.

The company’s callous disregard for workers’ lives was clearly demonstrated in March during a union memorial on the tenth anniversary of the fatal explosion. Marathon called the police to prevent mourners from placing 35 crosses—for 35 workers killed in 35 years—on refinery grounds. In a tearful ceremony, unionists read the names of the dead and planted crosses on a nearby highway median. Hours later, Marathon managers ripped the crosses out of the ground.

Marathon’s hard line was met with strong solidarity throughout the long strike. Supporters braved bitter February cold to march on company headquarters in Findlay, Ohio. Union members amassed outside a shareholder meeting and three speakers inside confronted the company on its gross disregard of worker ­safety.

As they go back into the refinery, these union members will maintain a watchful eye on a management all-too-willing to cut corners when it comes to worker safety.