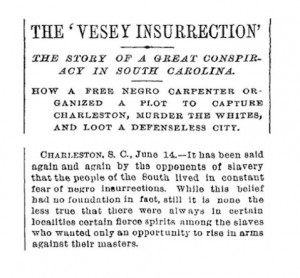 The racist attack on the Mother Emanuel African Methodist Episcopal Church in Charleston was a planned and premeditated assault on the legacy of struggle waged by the African-American people for two centuries in South Carolina.

Corporate media reports on the shooting seek to minimize its significance, featuring politicians and moderate elements in the community who express shock that such an incident would occur in a church in the state of South Carolina. The governor has said that South Carolina was a “loving community” and that the attack resulting in the assassination of State Senator Clementa Pinckney and eight other African-American church members, who were workers playing a leading role in community affairs, was somehow at variance with the social culture of the area.

Yet South Carolina has a long history of slavery, Jim Crow, racial capitalism and terrorist violence against African Americans. The former British colony and slave state reaped massive profits through the exploitation of Africans, beginning in the colonial period.

However, Africans have resisted their enslavement since the 18th century, from West Africa all the way to the Carolinas, in the southeast region of what has become known as the United States.

According to an article published in the South Carolina Gazette on July 7, 1759: “A Sloop commanded by a brother of … Captain Ingledieu, slaving up the River Gambia, was attacked by a number of the natives, about the 27th of February last, and made a good defense; but the captain finding himself desperately wounded, and likely to be overcome, rather than fall into the hands of merciless wretches, when about 80 Negroes had boarded the vessel, discharged a pistol into his magazine and blew her up; himself and every soul on board perished.”

There was much at stake for the slavocracy in South Carolina. A posting by the South Carolina Information Highway notes that in the history of the state: “The slave traders discovered that Carolina planters had very specific ideas concerning the ethnicity of the slaves they sought. No less a merchant than Henry Laurens wrote: ‘The slaves from the River Gambia are preferred to all others with us [here in Carolina] save the Gold Coast. … [N]ext to them the Windward Coast are preferred to Angola.’” (tinyurl.com/oeyruwm)

The site continues: “In other words, slaves from the region of Senegambia and present-day Ghana were preferred. At the other end of the scale were the ‘Calabar’ or Ibo or ‘Bite’ slaves from the Niger Delta, who Carolina planters would purchase only if no others were available. In the middle were those from the Windward Coast and Angola. …

“Carolina planters developed a vision of the ‘ideal’ slave — tall, healthy, male, between the ages of 14 and 18, ‘free of blemishes,’ and as dark as possible. For these ideal slaves Carolina planters in the 18th century paid, on average, between 100 and 200 sterling — in today’s money that is between $11,630 and $23,200! Many of these slaves were almost immediately put to work in South Carolina’s rice fields. Writers of the period remarked that there was no harder, or more unhealthy work possible: Negroes, ankle and even mid-leg deep in water which floats in mud, and exposed all the while to a burning sun which makes the very air they breathe hotter than the human blood; these poor wretches are then in a furnace of stinking putrid effluvia: a more horrible employment can hardly be imagined.”

It is quite obvious from the web and social media posting of suspect Dylann Storm Roof that he was well aware of the long tradition of African people fighting their oppressors. It’s why he targeted the Emanuel AME Church, which was founded in the movement against slavery and for self-determination as early as 1818. Efforts by federal and state officials have sought to ignore any possible links by Roof to white supremacist organizations which exist today in South Carolina and neighboring North Carolina, where he was captured.

The perpetrator was an ideological racist who championed the system of settler-colonialism in Southern Africa and the United States. In a posting on the web, Roof wore a jacket with the insignia of the former apartheid regime in South Africa and the overthrown settler-colony of Rhodesia. That country, founded in the attempted genocide, forced displacement and virtual enslavement of the people of Zimbabwe during the 19th century, won its independence in 1980.

The fact that this church, with such a valiant history of resistance to slavery, was targeted illustrates that this was an attempt to intimidate the African-American nation as a whole and its institutions. Despite the legacy of slavery and segregation, the people of South Carolina have engaged in political activity since the antebellum and Reconstruction period.

Church rooted in rebellion during slavery

Emanuel grew out of the resistance to slavery during the early 19th century. A co-founder of the church was Telemaque, better known as Denmark Vesey.

His plans for a major slave revolt in Charleston in 1822 sent shockwaves throughout the antebellum South and other slaveholding areas of the U.S. Vesey and his comrades were hanged after a secret trial, while the church was torched by the slave masters. The church operated underground for decades only to resurface after the Civil War.

Vesey was first enslaved in the Danish colony of St. Thomas in the Caribbean in the late 18th century. He was reportedly taken to Haiti during the same period. There a revolution against French colonialism and slavery was carried out during 1791-1803, resulting in the first successful slave revolution against chattel bondage in history and the establishment of an African republic in 1804.

He and his master relocated to South Carolina before this revolution succeeded, during the latter years of the 18th century. South Carolina was a profitable state for the slave system, where due to the intensity of agricultural production, Africans far outnumbered whites by the 19th century.

It is reported that the Africans organized by Vesey planned to burn down plantations and kill slave owners, thus liberating the enslaved and taking people to Haiti to join the independent Black government there. The plot was revealed to the ruling slavocracy, resulting in the arrest of Vesey and dozens of others, who were tried in secret hearings leading to the initial execution of 35 people, with many others later.

The Emanuel Church grew out of the movement for independent self-rule among Africans, as represented by the Free Africa Society, which created the conditions for the formal founding of the African Methodist Episcopal Church in Philadelphia during the period of 1787 to 1816. The founders of the church included Richard Allen and Sara Allen, along with Absalom Jones. Emanuel is reported to be the third AME Church founded in the U.S.; it was the earliest of such institutions in the South during slavery and its aftermath.

The act of racist terrorism on June 17, just one day after the 193rd anniversary of the Denmark Vesey plot being revealed to the ruling class, represents a profound provocation to African Americans and progressive forces in general. The Confederate flag, which still flies on the grounds of the state Capitol in Columbia must be taken down, as demonstrators called for on June 20.

A ruthless campaign against racism and racist organizations must be waged by the African-American people and their allies across the country. Until racism and national oppression are overthrown, there can be no real transformation of U.S. society from capitalism to socialism.