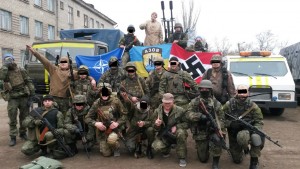 Representative John Conyers of Michigan, a veteran of the Civil Rights Movement and a longtime member of the Congressional Black Caucus, has introduced amendments to the 2015 Defense Appropriations Act to block the training of Ukraine’s fascist Azov Battalion and prevent the transfer of shoulder-fired anti-aircraft missiles, known by the acronym MANPADS, to Ukraine and Iraq.

The amendments passed the House of Representatives on June 11.

“I am grateful that the House unanimously passed my amendments last night to ensure that our military does not train members of the repulsive neo-Nazi Azov Battalion, along with my measures to keep the dangerous and easily trafficked MANPADS out of unstable regions,” ­Conyers said in a statement on his website.

In a tragic irony, on the same day ­Conyers’ amendments passed the House, a bloody attack in the eastern Ukrainian city of Kharkov confirmed the role of fascists in the misnamed “new, democratic” Ukraine championed by Washington officials.

On the night of June 11, a group of masked neo-Nazis stormed a group of foreign students outside their dormitory. Five Arab and four Nepali students, as well as two Russian speakers who came to their defense, were brutally attacked. The ­students were hospitalized, some with serious stab wounds and head injuries. (Inter
novosti. net, June 12, and email report from ­Donetsk People’s Republic Communists)

Local media reported that the attackers were followers of Andrei Biletsky, a notorious white supremacist from Kharkov who was jailed under the previous Ukrainian government for acts of fascist violence. Biletsky was freed during the U.S.-backed coup in 2014 and is now a leader of the Azov Battalion.

“Ukraine’s Azov Battalion is a 1,000-man volunteer militia of the Ukrainian National Guard that Foreign Policy Magazine has characterized as ‘openly neo-Nazi’ and ‘fascist,’” notes Rep. Conyers’ website. “Ukraine’s Interior Minister Arsen Avakov, who oversees Ukraine’s armed militias, announced that Azov troops would be among the first units to be trained by the Pentagon in Operation Fearless Guardian, prompting significant international concern.”

In fact, training is already underway, since the deployment of hundreds of U.S. troops to Lvov in western Ukraine in April.

Conyers’ amendments are largely symbolic, since the misnamed “defense” bill will have to be reconciled with the Senate version before final passage.

Those amendments are likely to face stiff opposition from the Obama White House and Senate Republican leader John McCain, who have worked hand in hand to support the Kiev junta of oligarchs, neoliberal politicians and neo-Nazis and their brutal war against the independent Donbass republics of Donetsk and Lugansk.

Further, the U.S., International Monetary Fund and NATO are moving full steam ahead with plans to bolster the bankrupt Kiev regime with money, heavy weaponry and troops to threaten the Donbass republics and Ukraine’s eastern neighbor, the Russian Federation.