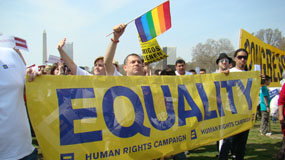 Michigan Gov. Rick Snyder on June 11 signed into law House bills 4188, 4189 and 4190, which combined give “faith-based” child placement agencies a license to blatantly discriminate. These agencies, which receive state funding, no longer have to provide services when there are “circumstances that conflict with [their] sincerely held religious beliefs.”

The law can be used to prevent lesbian, gay, bisexual, transgender and queer couples and individuals from adopting children in need of loving homes. Other potential parents who could face discrimination include unmarried heterosexual couples, single adults and people of a different religion from that of the agency, such as members of Michigan’s large Muslim community.

The bills amend decades-old laws on public welfare, probate and child protection. The 1973 “act to provide for the protection of children,” Public Act 116, required adoption agencies to act in the best interest of the child, with zero exceptions. Now, the more than 13,000 children who are waiting to be adopted in Michigan will have their futures put on hold while they wait for parents who meet the approval of taxpayer-supported religious bigots. This number of unplaced children is the fifth-highest in the country.

The bill package is an affront to the approximately 3,500 same-sex couples in Michigan who are raising their adopted children, as well as those providing foster care. Because they still cannot marry in the state, they are barred from jointly adopting their children. Only one partner is considered the legal parent; the other has no legal standing if harm should come to the legal parent. This is the reason April DeBoer and Jayne Rowse, two Detroit-area nurses raising four adopted special needs children, took the fight for marriage equality all the way to the U.S. Supreme Court. A ruling is expected by the end of June.

The new law has ramifications beyond the right to adopt children. “We know it will only embolden proponents of the dangerous … bill that would give any individual or business a ‘license to discriminate’ against LGBT Michiganders,” said Jay Kaplan, staff attorney for the Michigan American Civil Liberties Union’s LGBT Project. The ACLU plans to sue to overturn the anti-adoption bills. (Between the Lines, June 11)

The Michigan Legislature is under the sway of Tea Party politicians, but Gov. Snyder, when it suits him, presents himself as a “moderate” Republican. Yet from day one, he has signed into law one reactionary bill after another — attacking women, unions, people of color, low-income residents and the LGBTQ community. All of the attacks emanating from the state capital of Lansing — which hurt Michigan’s children the most — create an objective basis for a united mass movement.