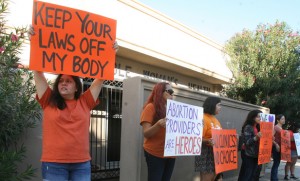 The U.S. Court of Appeals for the Fifth Circuit on June 9 upheld two of the strictest, most unscientific and potentially life-threatening limits on abortion services passed by the Texas Legislature in 2013. The provisions impose the most stringent restrictions on access to abortion in the United States since 1973 when Roe v. Wade legalized abortion.

Reproductive rights activists and women’s health care providers immediately vowed to fight the ruling, and the Center for Reproductive Rights is appealing it to the Supreme Court.

One restriction is that women’s health clinics providing abortions must meet all the physical and staffing requirements of a hospital-like ambulatory surgical center. The other provision requires doctors who perform abortions to have admitting privi­leges at a hospital within 30 miles of the clinic.

Passed under the patronizing guise of protecting women’s health, both rules have been exposed as “sham” or “junk science.” First-trimester abortions, nearly 90 percent of all abortions performed in the U.S., are among the safest medical procedures, with less than 1 percent of patients requiring emergency care. In fact, the American Medical Association and the American College of Obstetricians and Gynecologists submitted a joint brief opposing the law, saying that instead of protecting women’s health, the law “jeopardizes women’s health by restricting access to abortion providers.”

But that is precisely the lawmakers’ anti-woman goal. They are hellbent on restricting women’s right to control their own lives and that of their families.

If the Supreme Court does not intervene and allows the Texas law to go into effect on June 30, only eight clinics will remain open, all in the eastern part of the large state. That will put 900,000 women of childbearing age, about 17 percent of the state’s total, 150 miles or further from the nearest clinic. (New York Times, June 11)

These geographical constraints will impose huge burdens on working and oppressed women who need access to abortion, especially low-wage workers, women of color, youth, immigrants and women who are disabled, live in rural areas or are victims of domestic violence. In addition, “undocumented” women immigrants face great risk at border patrol checkpoints of being discovered, detained and deported.

Expenses to have an abortion would quickly increase when a woman has to take off from work for at least three days and then pay for gas, lodging, food and child care, on top of the cost of the abortion. Some estimates run as high as $2,000. That divides women into two camps: those who can afford to get abortions despite such obstacles and those who can’t.

The big question is, how will the Supreme Court rule in this case? Either way, it seems likely that the Texas law will end up before the court in a form that could ultimately affect millions of women in the U.S.

Even though the court’s conservative majority is well known, there is a vital social factor beyond the court that could force it to rule for reproductive justice: a massive turnout of angry, determined women and their progressive allies in the streets all across the country.

That is how Roe v. Wade was won. That is how we will keep abortion legal and make it accessible for all.