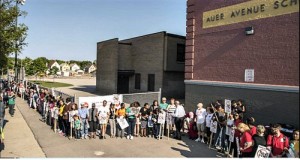 The right-wing Wisconsin State Legislature and Gov. Scott Walker are now allegedly debating the 2015-17 state budget. This legislation contains some of the most vicious attacks in the history of the state in many areas, particularly public education. Hundreds of millions of dollars in cuts for K-12 and higher education and expanding voucher schools statewide are top budget austerity goals.

The proposed Milwaukee plan would take over so-called “failing” schools in the Milwaukee Public School system and hand them over to capitalist corporations to operate. The “Opportunity Schools Partnership Program” (OSPP) would be run by a commissioner to be appointed by Milwaukee County Executive Chris Abele, a leading capitalist in the Wisconsin Democratic Party. The commissioner would have parallel authority with the elected Milwaukee Public School Board and would be accountable only to the county executive.

The 55 schools listed as potential targets have predominantly Black or Latino/a student populations and are in parts of the city devastated by decades of deindustrialization and lack of social-safety nets.

All MPS workers at schools taken over would be fired and forced to reapply for their jobs. They would have to waive their right to be represented by a union in order to be considered for rehire. (fightbacknews.org, May 20)

In Milwaukee, a city with a majority of people of color, the proposed state budget contains provisions modeled after austerity legislation and policies enacted in other cities with large African-American populations, such as Detroit, New Orleans and Philadelphia.

Right-wing think tanks like Americans For Prosperity, Heritage Foundation, Lynde and Harry Bradley Foundation, MacIver Institute and other Wall Street forces are behind the attacks on public education.

The Milwaukee Teacher Education Association is a leading force in the fight against the OSPP plan, as are the Schools and Communities United Coalition and youth organizations such as Youth Empowered in the Struggle (YES). The week of June 1 these and other supporters of public education are joining together in a series of mass direct actions to demand the OSPP and all other austerity provisions be taken out of the state budget.

Organizers are also asking supporters to sign a petition targeting State Senator Alberta Darling. The senator, a longtime suburban politician and opponent of poor and working people, is a supporter of the scheme to take over the Milwaukee Public Schools. She will be getting a visit June 4 from Milwaukee residents who will have a mass protest where they will deliver the petitions to her. Sign the petition here: bit.ly/1GxcDXB.