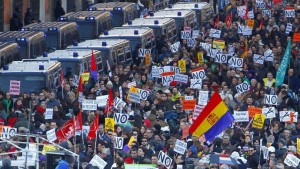 Capitalist austerity programs are nothing new to people living in oppressed countries, most of which are former colonies or neocolonies dictated to by the powerful financial institutions of the U.S. and Europe.

Under their “structural adjustment programs,” the International Monetary Fund and World Bank have forced scores of countries, especially in Africa and Latin America, to cut to the bone public spending on health, education, infrastructure and other vital services. It was all done so the transnational banks could continue to receive huge interest payments on the “indebtedness” hanging over countries whose resources have been stolen for more than a century by the very same imperialist powers.

The consequences have been horrendous. Desperate emigration from these countries has ballooned as their economies have imploded. Even the Ebola epidemic that swept Liberia, Sierra Leone and Guinea in West Africa last year was directly linked to cuts in public health demanded by “structural adjustment” schemes, according to an analysis in a preeminent British medical journal. (The Lancet, Dec. 22)

But the demands of the bankers haven’t stopped there. In recent years, especially since the 2008-2009 global capitalist economic crisis that has never really been overcome, austerity has also become a byword in many developed capitalist countries.

By 2011, austerity measures had been enforced in many European countries by long-established bourgeois political parties that were used to serving the class interests of the financiers and CEOs in times of relative growth and stability. Some were social-democratic parties that at one time had even presided over concessions that helped raise the working class’s standard of living. Suddenly, they found themselves confronted with very large anti-austerity demonstrations, mainly by workers in the public sector but also involving great masses of people who were feeling the cuts most deeply.

These huge demonstrations in country after country began to affect the political climate, undermining the incumbent parties as the voters looked for ways out of their suffering. The biggest break so far, of course, has been in Greece, where, this January, a relatively new electoral formation, Syriza, was catapulted into leading the government on the promise that it would refuse to carry out the cuts that Europe’s imperialist bankers had demanded in social services, particularly government pensions.

Even though the Greek crisis has not been resolved and the threats being made against Syriza by the financiers, especially the German banks, have grown in stridency, the political fallout against established ruling parties elsewhere continues to grow, taking many forms.

From Greece and Spain to Ireland, Scotland and even Canada, voters have been drawn to parties, some of them brand-new, that attack austerity and promise to find a way out of the budget cuts that the politicians in office defend as absolutely necessary.

The latest setback for the incumbents came in Spain, where voter support for the left-wing coalition Podemos in local and regional elections on May 15 brought some surprises. Podemos, like Syriza, has quickly gained support by promising not to impose austerity measures on the people.

In Barcelona, the second-largest city in the Spanish state and capital of semi-autonomous Catalonia, the new mayor will be Ada Colau, head of Barcelona en Comú, a coalition of leftist parties that includes Podemos. Two years ago, Colau, 41, made headlines when she was arrested while occupying a bank in an anti-poverty protest.

In Madrid, the rightist People’s Party has been in power for some 20 years. Its candidate in the recent mayoral election, Esperanza Aguirre, is a countess by marriage with big funds at her disposal who terror-baited the left. The outcome of the election is still in doubt. A leftist judge, Manuela Carmena, came within one percentage point of defeating the countess. One of them will have to form a coalition with the middle-of-the-road Socialist Party in order to take office.

Carmena, who back in the days of fascist dictator Gen. Francisco Franco saw five of her colleagues gunned down in her law office and joined the outlawed Communist Party, was the candidate of a leftist coalition called Ahora Madrid, backed by Podemos. Whether or not she becomes mayor, the election marks a departure from the past.

The question of austerity has also figured in recent popular votes in Ireland, Scotland and the Canadian province of Alberta.

The referendum in Ireland on May 22 that approved same-sex marriage astounded many around the world who hadn’t realized the strength of the progressive movement there in standing up to the Catholic Church. The popular vote was celebrated as a demonstration of unity and against bigotry that will serve the Irish people well in their struggle for relief from austerity measures.

Before the vote, Joe Higgins, a member of Dáil Éireann (Ireland’s house of representatives), released a statement saying, “I would particularly appeal to the anti-austerity, progressive movements across the country to support the referendum and to use their networks and organizations to mobilize the Yes vote on Friday to make sure that we banish this form of inequality as a step in our fight for full equality.” (Anti-Austerity Alliance)

In the 2011 Irish election, Sinn Fein, the party most closely associated with the long struggle for independence from Britain, had for the first time received a strong vote after calling for a nationwide referendum on whether an IMF bailout agreement should be scrapped.

In the vote for members of the British Parliament this May 5, the Scottish National Party swept the election in Scotland, winning 56 of the 59 seats. Two weeks before the election, SNP leader Nicola Sturgeon had released a party manifesto that emphasized it would fight austerity throughout the UK, “pledging to fight for public spending increases and end cuts across Britain.” (BBC News, April 17)

Last September, the Scottish Nationalists came within six points of winning a referendum on independence, after pledging they would end austerity if elected.

On the other side of the Atlantic, the struggle against austerity figured in the defeat of the Progressive Conservative Party in Alberta, long considered the most conservative province of Canada. Years of a booming economy dependent on exploiting tar sands and other oil deposits had earned Alberta the nickname of “the Texas of Canada” and entrenched a well-heeled political establishment. But when oil prices began to drop last year, the braggadocio by Alberta’s politicians about the province’s oil riches was replaced by their demands for budget cuts and tax increases — on the people, but not the corporations.

That was the undoing of provincial Premier Jim Prentice, who was replaced this May 24 by Rachel Notley of the New Democratic Party. Notley promised to raise corporate taxes in order to reduce fees and roll back cuts in services. The NDP raised its number of seats in the provincial legislature from four to 54 out of the total of 87 seats — an incredible win that broke an 80-year grip on the province by center-right governments.

In Spain, Ireland, Scotland and Alberta, women have played leading roles in these electoral victories, in most places leading their parties’ tickets. This is not by accident. Budget cuts in areas like health, education and other public services hit women the hardest — both because they make up the majority of the workers in these fields and because they are often mothers and homemakers who rely on getting decent services for their families.

Where women were once considered either apolitical or a conservative force in politics, they are now taking the lead in demanding — and attempting to carry out — progressive change.

The question now is, what happens next? The people have spoken, making clear that they are sick and tired of the tyranny of the superrich who control the financial superstructure of capitalist society. But even this very tangible political expression of disaffection from the status quo doesn’t change that much. Elected officials come and go; the state itself, which rests on violence and repression, remains. Winning an election is not the same as unseating the ruling class from its control over economic and political life.

This is not to diminish the importance of this shift in the desires of the electorate. Consciousness is changing under the hammer blows of monopoly capital, and understanding who is your enemy is a necessary precondition to any effective social movement for change.

Outraged voters of today can — and must — become the revolutionaries of tomorrow, because this vicious system of exploitation is not going to go away. It has to be taken down.