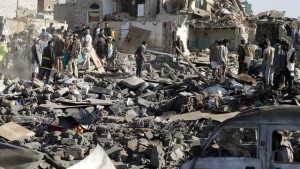 Following is a statement for a petition received from the Kolkata, India, based International Anti-imperialist Coordinating Committee (IACC) on May 28.

Following the various forms of Saudi-led  aggression against Yemen, without distinction between persons and things, since March 26, 2015, causing the death of hundreds of Yemenis, be these children, women, old people, etc. …

Feeling painful vis-à-vis this people’s grievance as a result of the aggression against a sovereign state, member of the United Nations and Arab League, in a confrontation of a people looking for future and self-determination, as well as getting out of dependency.

Since this aggression against Yemen and Yemenis is unjustified, this imposes a duty on the Arab and Islamic worlds and all free people all over the world to sustain this struggling people against Saudi-led killing and its destructive apparatus.

We call upon you to take part in launching a large defensive campaign for the right of Yemenis to face off Saudi-led aggression and its impacts and to call its perpetrators to account notably after posing a threat to the international peace and safety and committing dangerous international crimes punishable under international law and modernized nations’ laws, most notably:

All these crimes have been perpetrated before the world’s very eyes. Let’s work together to stop them from killing this struggling people and not to let the perpetrators go scot-free.

To sign the petition, which has also been published in Arabic, French and Spanish, go to this link: http://www.medhr.org/default1.aspx