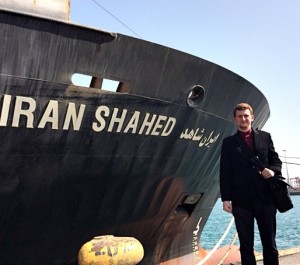 May 19 — A Red Crescent Society cargo ship carrying medical supplies, food, water and other humanitarian aid to Yemen from Iran is presently in the Gulf of Aden, due to arrive at the Yemeni port of Hodaida on Thursday, May 21.

Human rights and antiwar activists on board the relief vessel, the Iran Shahed, are urgently calling on concerned people to contact the White House and demand that the ship be allowed to dock in Yemen so the aid can be delivered.

Two days ago, Saudi Arabia announced that, after a five-day pause, it had resumed the bombing of Yemen, begun two months ago with tactical support from the Pentagon. The oil-rich, reactionary kingdom has intervened in a long-lasting internal struggle in Yemen in order to restore a pro-Saudi political figure, Abed Rabbo Mansour Hadi, to the presidency.

Saudi Arabia, a major U.S. ally in the Middle East, has also imposed an embargo on deliveries of food and water to Yemen, formerly a British colony and now the poorest country in the Middle East. Yemen is largely desert, and must import almost all the food for its 25 million people.

The internal struggle and the Saudi bombing have left at least 1,400 people dead since March 19, according to the United Nations.

According to an online database, since 2002 the U.S. CIA has carried out 124 drone and missile strikes in Yemen that have killed approximately 1,100 people. (securitydata.newamerica.net)

‘The blockade must end!’

Caleb Maupin, a U.S. activist aboard the relief ship, reported in a May 18 message to people in the United States:

“There is no question in my mind about the absolutely humanitarian nature of this mission. I have personally looked inside the cargo areas of this ship and seen nothing but humanitarian items like band-aids, disinfectant, food and bottled water.

“The Iranian Red Crescent Society, like all organizations affiliated [with] the International Red Cross/Red Crescent Society in Geneva, follows seven guiding principles of work. Among them are non-involvement in military operations, non-partisan delivery of aid and volunteerism.

“The Iranians would welcome the United Nations or the International Red Cross/Red Crescent to inspect this ship. But the criminal Saudi regime and its U.S. and Israeli allies are simply not welcome aboard. The Iranian government has made that absolutely clear, and all of us in the delegation of peace activists from Germany, France and the United States absolutely agree with this decision.

“The Saudi regime, which beheads and tortures people routinely, and is currently burning the skin of Yemeni children with the chemical weapon white phosphorous, has no business entering this ship.

“If we have no interference, we will reach Hodaida on Thursday and deliver our 2,500 tons of supplies to the Yemeni people. We have recently been informed that the Saudis have already bombed the port of Hodaida in anticipation of our arrival.

“Let the hungry children of Yemen live! This illegal, immoral blockade must end.”

For information on how to send a message to the White House demanding the humanitarian ship be allowed to pass, see the website of the International Action Center, iacenter.org.