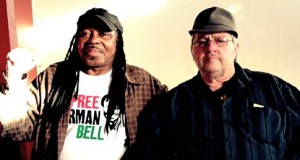 Oakland, Calif. — “I am here today to ask people to support our political prisoners. If we all get together, I am sure we can bring them home,” said Richard Brown, a former Black Panther Party member and himself a former political prisoner from San Francisco. Brown spoke on a panel of formerly incarcerated political prisoners that was the final session of the one-day, “No More Locked Doors Conference on Political Prisoners,” held May 16 at the Qilombo Collective in Oakland.

According to conference organizers, “No More Locked Doors” was organized to commemorate the 30th anniversary of “the horrific bombing of the MOVE Organization by the Philadelphia police,” and to build awareness of U.S. political prisoners. On May 13, “Let the Fires Burn,” a documentary about the May 13, 1985, bombing of the MOVE house in Philadelphia, was shown at the Omni Commons in Oakland as part of this effort for political prisoner support.

Throughout the day, workshops were held to educate community activists about the cases of Mumia Abu-Jamal, Óscar López Rivera, the MOVE 9, Herman Bell, Jalil Muntaqim and other political prisoners currently serving long sentences in U.S. state and federal prisons. Several workshops focused on Mumia’s medical condition and activist efforts to get him released from jail. A video excerpt from the People’s Video Network of a recent New York City press conference to protest the medical neglect suffered by Mumia was played throughout the day.

The case of Óscar López Rivera, a leader of the Puerto Rican independence movement, was also highlighted at the conference. Supporters invited everyone to participate in May 29-30 national days of protest to free Rivera.

The conference ended with a panel of formerly incarcerated political prisoners. All of the speakers talked about the need to build a movement to free all political prisoners. “The power of the people really makes a difference. That’s why I am here on the streets today,” said Sundiata Tate, a formerly incarcerated political prisoner and comrade of George Jackson, a revolutionary prisoner who was assassinated by San Quentin guards in 1971. Tate, who faced serious felony charges as a member of the San Quentin 6, was later acquitted of all charges. For more information check out nomorelockeddoors.org.