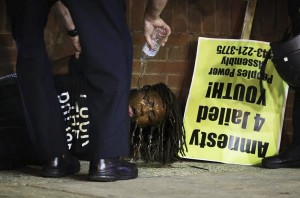 May 11 — Close to 500 people have been arrested here since the rebellion that began on April 25 after the killing of Freddie Grey, yet another young Black man who has died at the hands of the police. Some 33 of those arrested remain in jail.

Some were brutally beaten and pepper-sprayed by police even as television cameras caught the action. Those still being held are in central booking or at a nearby juvenile facility, without due process. They were denied their right to see a court commissioner within the 24-hour period previously required.  Maryland Gov. Larry Hogan provided an excuse for this delay by proclaiming a “state of emergency,” which also authorized deployment of the National Guard.

The governor has never even considered declaring a state of emergency over Baltimore’s extreme poverty, unemployment and decaying schools and homes in the Black community. These unbearable conditions are what underlie the struggle in a major city that has been stripped of its once plentiful industrial jobs.

Those arrested included Baltimore youth, journalists, medics and legal observers. Allen Bullock’s parents urged him to turn himself in after he was pictured in a news media photo allegedly breaking a police cruiser’s windows. Bullock is now facing life in prison.  His bail was set at $500,000 — more than three times the $150,000 set for the six officers charged with the assault and murder of Freddie Grey.

In an outpouring of support, anonymous donors have posted Bullock’s bail.

The local Baltimore movement, including the Baltimore People’s Power Assembly and the Bmore United Coalition, has called for amnesty for all those arrested.

The People’s Power Assembly is planning a massive protest on Saturday, May 16, at 3 p.m., gathering at McKeldin Square, Light and Pratt streets, in downtown Baltimore. (See tinyurl.com/mtpf2vz for updates.)

A statement issued by the group says in part: “How can city officials equate property damage with the life of a human being? The youth of Baltimore need our support. We demand: Drop all charges and grant full amnesty! The people of Baltimore, especially the youth, need full employment at a livable wage, decent education and housing, not jails, racism and police terror.”

The PPA points out that the struggle continues, not only for amnesty for those arrested but for justice for Freddie Grey; for the conviction and jailing of the six police involved in his murder; and for the fight to end police terror. The group has plans for a massive tribunal and assembly on June 6, a date set prior to Grey’s death. (tinyurl.com/ou7wjyt)