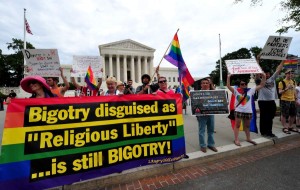 Last week the Supreme Court of the United States heard arguments for and against legalizing same-sex marriage. Plaintiffs from Michigan, Ohio, Kentucky and Tennessee — where state courts upheld same-sex marriage bans — brought cases opposing the bans before the high court. The court’s ruling, expected in late June, will decide whether the U.S. Constitution gives same-sex couples the right to marry. SCOTUS will also decide if states must recognize same-sex marriages conducted in other states or countries. Same-sex marriage is legal in all but 13 states and in 17 countries.

The plaintiffs, 19 men and 12 women, are Black, Latino/a, Asian and white and of different ages and occupations. Most had no activist history but are proud to be fighting for their families and for thousands of couples in their home states.

For the majority of the plaintiffs, the driving issue was the couples’ need to be recognized as joint parents. The problem hit home for Kentuckian Pam Yorksmith when she took the child she is raising with Nicole Yorksmith to the hospital. The hospital would not authorize treatment until Nicole, the legal parent, gave permission. Jayne Rowse and April DeBoer, two Michigan nurses, sued the state for the right to jointly adopt the four children they are rearing together.

Jim Obergefell married his partner of 21 years in Maryland in 2013. When John Arthur died of amyotrophic laterals sclerosis three months later, Ohio would not list Jim as John’s spouse on the death certificate. Denying the right to marry affects the ability to access death benefits that would normally fall to the surviving spouse.

For 40 years, Luke Barlowe and Jimmy Meade of Kentucky passed as roommates, keeping their 2009 wedding a secret. But when they learned of the lawsuit, Barlowe remembered trying to commit suicide as a teenager. Thinking about the many lesbian, gay, bi, trans and queer teens who still kill themselves, Barlowe explained, “We wanted to do this not for us — it does nothing for us — but we wanted to do it for the kids coming up behind us.” (Detroit News, April 23)

Huge throngs packed the courtroom and demonstrated outside for marriage equality, greatly outnumbering the bigots damning LGBTQ people to hell. Poll after poll shows a majority of people in this country support the right to marry. Yet, decades after the Women’s Liberation movement trashed the stereotype of woman as baby-machine, Michigan’s Special Assistant Attorney General John Bursch argued the state had a compelling interest in protecting the “procreative” function of marriage to “serve purposes that, by their nature, arise from biology.” (Between the Lines, April 28)

Justice Anthony Kennedy is viewed as the swing vote who will decide if the court votes 5-4 in favor of marriage equality or 5-4 against it. He stated during the hearing, “This definition [of marriage exclusive to one man and one woman] has been with us for millennia.” Antonin Scalia, expected to vote to uphold state bans, stated, “You’re asking us to decide it for this society when no other society until 2001 ever had it.”

The notion that marriage as an institution has been with us, unchanged, for “millennia,” is contradicted by a mountain of anthropological evidence.

Some 150 years ago, Frederick Engels, Karl Marx’s lifelong collaborator, published a historical materialist analysis of human social/sexual relations. “The Origin of the Family, Private Property and the State” traced the evolution of “marriage” from the beginnings of hominid sociality, through various stages of band and tribal society, into the first agricultural settlements that witnessed the rise of private property relations and led to the slave-owning, feudal and capitalist modes of production. With each society’s unique economic relationships came an equally unique “definition” of marriage.

Before private property relations dominated society, human social/sexual relationships were freely formed and freely dissolved, with men and women having equal rights in marriage as in all matters of human concern. But with the shift from communal ownership to “private property” — prehistorically an inconceivable notion — societies became divided into classes of exploiters and exploited. Not only were the products of human labor appropriated by the dominant class, but human beings themselves, especially children and “wives,” were treated as the property of men.

What about same-sex marriage? Information about that, which Engels lacked, is now readily available. Lesbian, gay, bisexual and transgender people have always been part of the human family. They openly “married” same-sex and same-gender partners in pre-class, tribal societies and continued to do so, but in secret, under the tyranny of patriarchal, class society.

That global tyranny is being challenged by powerful social forces, such as the women’s and LGBTQ movements. The reactionary, unelected Supreme Court feels the heat. The long-repressed dream of open, legal marriage is close to realization.

One day the burgeoning movement of workers and oppressed will replace dead-end capitalism with a new communalism — socialism — a rational system where people’s needs come first.

Bob McCubbin contributed to this article.