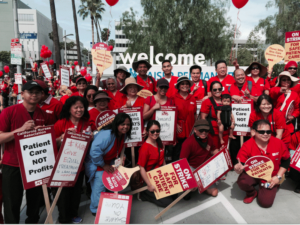 Some 5,000 registered nurses, organized by the California Nurses Association and National Nurses United, went on a one-day strike or marched on picket lines April 30 after contract negotiations with the Sutter Health hospital corporation hit a dead end. Despite raking in more than $3 billion in profits over the last five years and paying its CEO an obscenely high $6 million salary in 2013, Sutter continues to demand cuts to nurses’ health care plans and dangerously low staffing levels at its hospitals.

Emergency room nurse Debra Bucculatto told the press: “We need adequate health care for ourselves and for our families along with staffing conditions that are safe. As it is, Sutter is trying to cut corners despite tremendous profits, but nurses deserve basic essentials … [like] quality health coverage and safe staffing.” (National Nurses United, April 29) Sutter hospital nurses were joined by thousands of nurses at Kaiser Permanente and Providence Health hospitals in various cities who also walked off the job to protest corporate policies that promote profit above decent health care.

While politicians campaign across the country making empty promises about “economic opportunity” and a fair shot at the “American dream,” workers at the U.S. Senate’s own cafeteria struggle just to make ends meet. That’s why contracted food service and janitorial workers at U.S. federal buildings in Washington, D.C., went on a one-day strike April 22 to demand fair wages and collective bargaining rights.

President Obama’s 2014 executive order raising federal contract workers’ minimum wage to $10.10 per hour isn’t enough, said Bertrand Olotara, a single father who earns $12 an hour as a cook in the Senate cafeteria. “Even though I work seven days a week — putting in 70 hours between my two jobs — I can’t manage to pay the rent, buy school supplies for my kids or even put food on the table,” he wrote in an April 22 op-ed in The Guardian. “I hate to admit it, but I have to use food stamps so that my kids don’t go to bed hungry.”

With support from the American Federation of State, County and Municipal Employees, workers rallied outside the Capitol Building to demand $15 an hour and a union for all federal contract workers, who number about 26 million, or 22 percent of the civilian workforce. (AFSCME.org, April 22)

Mourn the dead, fight for the living

Every year on April 28, Workers’ Memorial Day, laborers throughout the world pay tribute to those who have been killed on the job or injured by their work and pledge to renew the struggle for workplace safety. In 2013 in the U.S. alone, 4,585 workers died as a result of workplace accidents and an estimated 50,000 died from occupational diseases, as detailed in the AFL-CIO’s 2015 edition of “Death on the Job: The Toll of Neglect.” Nearly 3.8 million work-related injuries and illnesses were reported, but because many are not reported, the true toll is more than two to three times greater, or 7.6 million to 11.4 million injuries each year. (aflcio.org, April 23)

Among those taken by workplace tragedies in 2015 was 40-year-old construction worker Trevor Loftus, who was killed April 24 in New York City in a freak accident when the hydraulic system on the crane he was operating failed, crushing him. (New York Daily News, April 24) Workers need strong, fighting unions to ensure workplace safety and a totally different economic system where human lives are valued above profits.

The organized labor movement, along with national environmental and immigrant rights groups, has taken a strong, united stand against the trade agreement called the Trans-Pacific Partnership, whose details are hidden from the public. At a New York City rally on April 27, residential service employee Steve Ellwood, a member of Service Employees 32BJ from the Bronx, said the TPP would “devastate workers’ rights, encourage more outsourcing of already scarce jobs, compromise food safety, imperil environmental standards and give multinational corporations the right to sue the government if they do not like the city’s laws and regulations. … We want NYC to be a ‘TPP-Free Zone.’” (Labor Press, April 28)