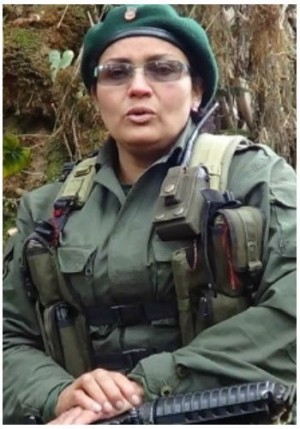 Peace talks between the Revolutionary Armed Forces of Colombia-People’s Army (FARC-EP) and the Colombian government, taking place in Havana, Cuba, are making some progress despite many challenges.

From April 11 through 18, 33 United States and other international solidarity activists had the opportunity to meet in Havana with FARC-EP plenipotentiaries, as well as representatives of the Colombian government and the guarantor countries, Cuba and Norway, along with the FARC-EP legal advisors from Spain.

One of the most illuminating sessions was our meeting with the “Sub-Commission on Gender.” This body was established to make sure that any agreements between the parties “advance the cause of women, make sure their position is advanced, recognize women’s central role and empower women to improve their position,” according to Victoria Sandino, a leading FARC-EP representative on the sub-commission.

The women of FARC-EP took seriously the demands that were raised by Colombian women during many exchanges. As a consequence, the Sub-Commission on Gender was created.

Many of these proposals from organizations of women and of lesbian, gay, bisexual and transgender people were made through a process that includes a website set up by the FARC to submit suggestions, which are then presented to the “Table of Conversations” (that is what they call the arena of talks between the FARC-EP and the government). The process is a democratic one that allows the Colombian masses to make their concerns and suggestions heard. Over 100,000 suggestions have been received.

Women suffer disproportionately from the consequences of the war, which the Colombian government, with Washington’s backing, wages against the people. Women have been made widows. They comprise 70 percent of the millions of displaced. They experience workplace discrimination. They see their children murdered. And to earn income, they become “mules” who smuggle illegal drugs out of Colombia. As political prisoners and prisoners of war, they are subject to torture and sexual violence.

All of this came to light when both sides at the Table of Conversations listened to testimonies from victims of the conflict, a process the FARC-EP insisted on. Of the 60 witnesses, six were from women’s organizations and two from LGBT groups. Their proposals were integrated into the process of talks. Some 80 percent of Colombian women have been victimized some way or another by the war. “But,” Sandino stressed, “we aren’t only victims, we are actors, we are political agents. We have been fighting and making demands.”

While the Colombian government also is represented on the sub-commission, it became clear to us that the FARC-EP women were its driving force. All of the seven women and one man who spoke to our delegation about the sub-commission were from the FARC-EP side of the table. “Women combatants want to achieve peace,” they explained.

Speakers also dispelled some of the myths about the women in the guerrilla army. The capitalist media have portrayed FARC-EP women as sex slaves of male combatants, making false claims of forced abortions and innumerable other abuses. In fact, women have always played leading roles since the FARC’s founding in 1964 and comprise at least 30 percent of all combatants. Many play leading roles at the regional level.

All women receive the same training as men — training that includes “learning the root causes of oppression, the ethical and moral values of being a revolutionary, and the humanitarian values we are fighting for.”

The rights of women and children, including those who experience domestic abuse, are attended to in areas under FARC-EP control. When asked about the fact that the top leadership — the FARC Secretariat — is all men, the speakers stated that the goal is to improve, that “we are in a perpetual state of growing, becoming better than we were.”

LGBT rights are respected and protected

The Sub-Commission on Gender is also reviewing all agreements to make sure LGBT rights are respected and protected. “We have the utmost respect for people wherever they come from, sexually speaking,” a member of the group stated. “As a matter of principle we would never discriminate against anyone for their sexual orientation.”

The delegation enjoyed this rare opportunity to learn how real peoples’ democracy — a process that makes an extra effort to make the most oppressed voices heard — can be conducted even under the most extreme conditions of war, repression and neoliberal austerity.

Martha Grevatt represented the Inter­national Action Center on the delegation, sponsored by the Alliance for Global Justice. The delegation also included representatives of the National Lawyers Guild and several Latin American solidarity groups.