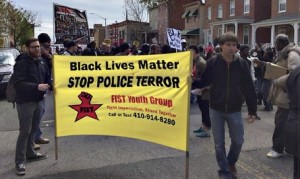 April 27 — Last night, some comrades and I went to the front lines of the rebellion in Baltimore, at North Avenue and Pennsylvania Avenue. As we got closer to the neighborhood, folks in the community saw our signs calling for community control of the police and justice for Freddie Grey, and raised their fists in the air as they walked by.

When we got within a block of the action, the smoke from the burning CVS was so thick, it was hard to see and breathe. It wasn’t until the smoke dissipated for a moment that a line of riot cops appeared, waiting, clearly looking for blood as they stood with their batons and shields. Apparently, they were furious because of the brave fighters whom they had fought with earlier that day, who had caused many serious police injuries, including broken bones.

The streets were littered with smashed glass, broken police shields and garbage. A police car was on fire. The protesters moved forward and the officers retreated a few steps. We linked arms on the front lines. The police came towards us, shouting in unison, “Move back!” banging their sticks on their shields with each step forward that they took. We stood our ground until the police physically shoved us back with their shields and shot pepper spray into the line.

They started throwing flash grenades, tear gas canisters and smoke bombs, some of which were hurled back into the line of cops. People were screaming. Others had to hold back their friends, who were crying out in frustration, trying to move towards the police. One man who was not even fighting was grabbed by the police and pulled behind the police line. We couldn’t see him on the ground but we saw about 12 batons coming up above the officers’ heads and coming down on him. They made a wall so we couldn’t get past to help him. Clearly, they didn’t want recordings by witnesses of the savage beating that he was enduring. Everywhere around us looked like a war zone.

At a certain point, we had to leave to get back to the office for a national conference call on the Baltimore Rebellion. As we left, we looked around the community at the houses. Empty, boarded up houses, that was the real destruction. And it had nothing to do with the protesters but rather with decades of racism, oppression and neglect. Homes were boarded up and falling apart, blocks and blocks of housing projects, and litter and trash lined the streets that the city has abandoned while they regularly bring street cleaners through the richer white neighborhoods. Then we started passing by stores that were being “looted.”

Men, women and children were coming into the stores with empty hands and leaving with bags and boxes of the basic necessities of life. Food, drinks, toilet paper, baby food, diapers, etc. — all things that they never had free access to under capitalism. Children were getting their first pairs of new shoes and coming out of the stores smiling with fruit and candy. Community members came together and took as much as they could to give out to the people, especially the elderly who weren’t able to come out. This all was happening at the end of the month, as food stamps are running out, the stamps being a grudging form of assistance which has already been reduced by the ruling class to the point where most people in cities like Baltimore are hungry and desperate.

Some of the “shoppers” looked at us suspiciously, and people said: “Hey, get what you need, and get enough to last you a long time. We are with you.” I have never seen such joy and hope in the impoverished communities in Baltimore. They were finally getting what they needed, wanted and deserved as human beings.

Colleen Davidson is an activist with Baltimore FIST (Fight Imperialism, Stand Together). Go to fightimperialism.org.