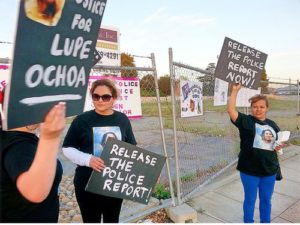 A crowd of family, friends and supporters gathered at the corner of 98th and Bancroft streets in East Oakland, Calif., on the evening of April 11 to celebrate the life of Guadalupe Manzo Ochoa. The young Latina had been killed by San Leandro police as they chased her into Oakland on Dec. 7, 2014.

The killing occurred in the wake of nationwide demonstrations and shutdowns in anger over the grand jury non-indictments of the police killers of Michael Brown and Eric Garner.

Lupe Ochoa, as her family calls her, was the mother of four children, ages 11 to 3. The three-year-old still asks for her mother, not understanding she will never return.

The family is demanding the release of the police and coroner’s reports. One of her sisters, who dressed Ochoa’s body for the funeral, says the wounds from the three bullets that entered her head were all on the side — not at the front where one would expect them to be if, as the police claim, she had been driving toward them.