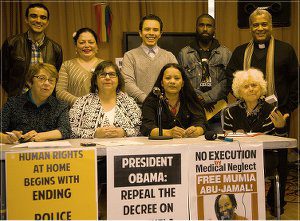 The International Action Center held a press conference in New York on April 10 in solidarity with the People’s Summit, which was being held in Panama City at the same time as the official Summit of the Americas.

The People’s Summit has adopted declarations against U.S. sanctions on Venezuela and the continuing U.S. blockade of Cuba, “among other topics affecting the underdeveloped America, like poverty and the rising power of the progressive forces.”

Presenters at the press conference called on President Barack Obama to rescind his decree imposing sanctions on Venezuela, at the same time he is proposing lifting them on Cuba.

Speakers raised the difficulties the U.S. government faces talking about human rights abroad when there is a huge problem in this country of police violence against Black people, primarily unarmed young men and women. The officials in this country so discount this problem that there isn’t even a national register of police shootings.

The case of Mumia Abu-Jamal, who was wounded but survived when police shot him during a traffic stop in 1981, was raised as an example of police violence. He was convicted of murder in 1982, spent the next 30 years on death row and was finally moved off death row due to unrelenting mass pressure. Still in prison, Abu-Jamal is now dangerously ill and risks death due to medical neglect.

The press conference successfully tied together the struggle against racism in this country, exemplified by the Black Lives Matter movement, with lifting the blockades the U.S. government imposes on poor countries that don’t go along with its imperial demands.

Teresa Gutierrez of the IAC chaired the well-attended press conference, held at the Solidarity Center. Among the presenters were Sara Flounders, representing the United National Antiwar Coalition; Suzanne Ross, speaking for International Concerned Families and Friends of Mumia Abu-Jamal; Ricardo Prado of Colombians in the Diaspora, who spoke in Spanish; and the Rev. Luis Barrios of ­I­FCO-Pastors for Peace, who explained how the current capitalist system in the U.S. contributed to the problems this conference was addressing.

After the formal part of the conference, some of the presenters were interviewed individually by reporters from the Spanish-language media.