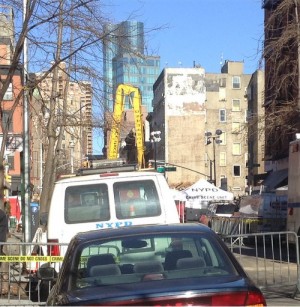 Four of the injured are still listed as “serious” according to a WNYC broadcast on March 30.

While the National Transportation Safety Board has yet to issue a final determination on the East Harlem explosion, the NTSB’s preliminary findings indicate leaks from gas mains over 120 years old were responsible.

Con Edison has admitted that it found an illegal installation of gas lines servicing the renovated apartments at 121 Second Avenue. The company knew that the gas going into that building was only supposed to be enough to supply the sushi restaurant on the ground floor.

What has come out about the latest explosion is a bit more complicated than aging gas mains and a careless supplier.

It involves a landlord who kept her tenants supplied with gas even after Con Edison shut it off; a utility which relies on private contractors to do critical safety inspections that Con Ed used to do; a general contractor who is facing charges of bribing Department of Building inspectors; and a city charged with supervising construction to ensure the safety of its residents but which is really more concerned with increasing real estate values.

Many areas of New York City, especially in lower Manhattan, like the East Village (which is conveniently close to Wall Street), are old, dilapidated and subject to intense gentrification. The building which exploded was reported to be more than 100 years old. The landlord, who renovated the building’s apartments last summer, seemingly wanted to do the job on the cheap.

Speculation in the coffee shops and buses running in the East Village is that the empty lots will be worth more than when they had buildings on them. Condos in a new building a few blocks away started at $1 million.

Posts and comments on Facebook talk about the uncapping of an outlet in another Manhattan neighborhood in order to put in a new light and finding gas still flowing in the outlet even though the building was converted from gas light to electricity 80 years ago.

In 2004, a woman and her dog were electrocuted by stray voltage from a utility access cover for which Con Edison was responsible. In 2006, the utility admitted that it had found 1,214 electrically charged covers in the past year. (New York Times, March 4, 2006) Two workers in the East Village were seriously burned by a charged cover last year. (Facebook comment) People walking their dogs in the East Village avoid utility access covers, even during warm, dry summer months.

Parts of Manhattan look glitzy and spiffy. Underneath this look, however, is an old, crumbling infrastructure that is patched but not truly repaired.

Deirdre Sinnott, who lives in the East Village, told Workers World: “This was a very scary incident. If it occurred later in the day, many more people might have died. It should be thoroughly investigated, preferably by the federal government, and neighborhood residents should be fully involved.”