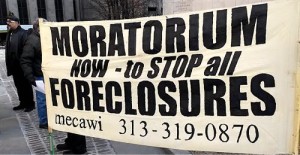 Bulletin: A temporary moratorium on tax foreclosures until May 12 was announced on March 31, after a mass demonstration outside the Wayne County Treasurer’s office in downtown Detroit.

A broad-based coalition of Detroit organizations is fighting for a moratorium on property tax foreclosures on 62,000 homes, apartment buildings, small businesses and lots in the city slated for seizure by Wayne County. Another 15,000 tax foreclosures are scheduled for the broader county.

Tens of thousands more properties will revert back to foreclosure since owners could not fulfill payment plans established last year. The county treasurer has encouraged people to sign agreements to pay in installments. However, with the city government over-assessing declining properties and at least 40 percent of Detroit residents living in poverty, it is highly unlikely these agreements will be fulfilled.

One woman with disabilities told Workers World she receives $769 in monthly benefits. Yet, in a desperate attempt to stave off homelessness, she signed an agreement with the treasurer’s office to pay $500 a month until her delinquent property taxes are paid.

Declare a state of emergency

On March 19, members of the Moratorium NOW! Coalition, Detroit Eviction Defense and others attended a Wayne County Commissioners meeting and demanded an immediate halt to the foreclosures. More than a dozen people testified there.

Delinquent water bills have been placed on property taxes in many households. Often, water bills are higher than the owed tax payments.

On March 24, a rally and press conference were held outside the Coleman A. Young Municipal Center before an intervention at the City Council meeting. There, dozens of people testified about the crisis, calling for a moratorium. People explained their plight under the repressive tax laws.

Moratorium NOW! activists distributed fact sheets to City Council members, stating, ”The funds are sitting in Lansing to stop these foreclosures. According to the January 2015 Helping Michigan’s Hardest Hit Homeowner report, $251 million of the $498 million in federal Helping Hardest Hit Homeowner funds that were provided to the state in 2010 remain unspent.

“These funds could … pay off delinquent property tax bills for occupied homes and prevent thousands of foreclosures. … Release of these funds will not only stop the destruction of our communities, but go a long way to resolving the financial crisis in Wayne County and Detroit which in large part is a result of declining revenues as a result of tax foreclosures.”

After the meeting, people marched from City Hall to the Wayne County Treasurer’s office.

By March 31, residents will lose title to their homes if delinquent taxes for 2012 are not paid or payment arrangements made. Within six months, the homes could be auctioned off, with unscrupulous “developers” prioritized over residents seeking to repurchase properties lost to foreclosure. A demonstration is scheduled March 31 at the Wayne County Treasurer’s office.

It was chaotic at the Treasurer’s office on March 27 as people crowded inside in a desperate attempt to avoid foreclosure. Members of Detroit Eviction Defense, the Detroit Active Retirees and Employees Association (DAREA) and Moratorium NOW! distributed thousands of leaflets there.

At a March 28 demonstration organized by clergy honoring the 50th anniversary of the Selma-to-Montgomery march, leaflets were distributed calling for people to take action.

On March 29, members of Moratorium NOW! and DAREA leafleted for the March 31 protest door to door in the Boston Edison Historic District, one of the city’s hardest hit residential sections where homes are vacant due to mortgage and tax foreclosures.

No solution by banks or government

Plans undertaken by the Detroit Land Bank Authority, a quasi-governmental agency, and the Detroit Blight Removal Task Force, headed by billionaire banker and corporate mogul Dan Gilbert, have failed to revitalize the city. Bankers’ initiatives have wasted tens of millions of dollars earmarked for blight removal. Federal funds allocated to keep people in their homes are being misappropriated to tear down structures, creating more flight and abandonment in remaining neighborhoods.

Moreover, Wayne County is being threatened with emergency management and bankruptcy, similar to Detroit’s experience in 2013 and 2014. Massive foreclosures will not prevent a state takeover of Wayne County’s operations.

Under Detroit’s emergency management and bankruptcy, the state of Michigan seized billions of dollars in medical benefits, pensions and public assets and turned them over to private interests. On March 1, the monthly pension payment cuts began for 32,000 city retirees and their families, which were approved in a postbankruptcy “plan of adjustment.”  Their health care benefits were severed one year ago, months before the federal court approved the plan of adjustment.

The plan of adjustment is unraveling as retirees face foreclosures and rising health care costs. Corporate-imposed Mayor Mike Duggan, the first white mayor in 40 years, has failed to attract investments that could create jobs and economic opportunities for African Americans, now 82 percent of the city’s population.

Duggan was crying broke by March 29, saying the blight-removal funds were drying up and more money was needed from Washington to tear down vacant homes in Detroit.

The banks, corporations and their surrogates in government have no real plans to revitalize Detroit. Only a coalition of neighborhood and mass organizations rooted in the working class can create the conditions to overturn the bank-led Snyder-Duggan program of fiscal austerity, mass impoverishment and forced removals of people from their homes.