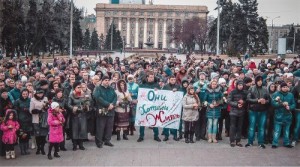 The town of Kostyantynivka in northeastern Donetsk exploded in rebellion March 16 after Ukrainian occupation troops driving a tank veered into oncoming traffic, smashed a traffic light and hit pedestrians on the sidewalk.

Polina, 8 years old, was killed instantly. Her mother was hospitalized in critical condition, while her younger sister escaped serious injury, shielded by the stroller she was riding in.

Witnesses at the scene said the Ukrainian troops — those loyal to the coup government in Kiev — were drunk.

As news of the tragedy spread, hundreds of residents poured into the streets, demanding the withdrawal of Ukrainian troops from the city.

Kostyantynivka is part of the independent Donetsk People’s Republic (DNR) and participated in the May 11, 2014, independence referendum. It has been occupied by forces loyal to the far-right junta in Kiev since last summer.

The DNR and neighboring Lugansk People’s Republic encompass the Donbass mining region, formerly part of southeastern Ukraine, and are often referred to as Novorossiya.

Thirty people overturned a police car at the scene. Then residents marched to a hostel where the occupation troops are barracked. They threw stones, smashed windows and set fire to tires in front of the building. (TASS, March 17)

Meanwhile, dozens of protesters seized a local administration building, where they raised the black, blue and red flag of the Donetsk People’s Republic. “The people of Kostyantynivka want Novorossiya to send troops,” a local man named Alexander told the Russia Today news agency.

The U.S.-backed junta of oligarchs, neoliberal politicians and neo-Nazis moved quickly to suppress the revolt. The four soldiers from the tank were spirited out of town. The Ministry of Internal Affairs gave police authority to use deadly force against the protesters. A squadron of the fascist Right Sector was dispatched to the city to mete out punishment. (Sputnik, March 17)

By the morning of March 17, the spontaneous uprising was quashed. An unknown number of people were arrested. Locals reported that sporadic gunfire continued throughout the day.

“Police identified and detained a number of persons who actively participated in massive unrest and set fire to motor vehicles in the town of Kostiantynivka on March 16. Restrictive measures against them are still being taken,” reported Olga Yurasova, press secretary for the Ukrainian-controlled regional police force. (Tass, March 18)

One of those “disappeared” was Denis Chubaka, a local journalist and Communist Party leader. Chubaka was one of the first people on the scene after the crash, and his photos of the aftermath circulated on social media and news reports worldwide. He was “abducted by unknown persons in military uniforms” on his way to work March 18. (Fort Russ, March 19)

Despite the repression, and despite being denounced by Kiev as “terrorist collaborators,” more than 100 people came out again May 18 to the site of Polina’s death, creating a makeshift memorial of flowers and toys.

The police chief announced the arrest of two more men on March 20, Novorosinform reports. Those detained face up to eight years in prison.

On March 17, hundreds of people gathered in Lenin Square in Donetsk, the capital of the DNR, for a rally entitled “Interrupted Flight” to remember Polina and other children killed in Kiev-Washington’s war against the people of the Donbass mining region.

People lit memorial candles at the base of the monument to Soviet leader V.I. Lenin and held signs denouncing NATO and the European Union for backing fascism in Ukraine. A giant screen over the square showed photos of children killed in the war.

As of Feb. 6, according to the United Nations, at least 59 children had been killed and more than 150 injured since the Ukrainian regime began its so-called Anti-Terrorist Operation. The U.N. records nearly 6,000 total deaths, but admits this number is unrealistically low.

DNR officials, denouncing the behavior of the Ukrainian occupation troops as a violation of the latest ceasefire agreement that took effect Feb. 15, said that an offensive to retake Kostyantynivka would be considered if the repression continues.

Col. Cassad, a respected commentator on military matters in Novorossiya, explained: “The epicenter of the unrest was located in an area full of junta forces. … So without outside help, the unrest couldn’t lead to the deposing of the junta’s power in Kostyantynivka and to the spreading of resistance to the neighboring cities.

“The Right Sector militants and highly motivated military forces were brought into the city, after which the sweep and arrests followed. …

“Nevertheless, these protests showed that the occupation regime is based on naked violence, and if the junta suffers a military defeat, then our soldiers will be met as liberators in the settlements where the junta regime is removed.” (Colonel Cassad Blog in English, March 18)