This interview by Carlo Pereira of the German weekly Unsere Zeit (Our Time) was made during the International Seminar in Mexico City on March 12 and published in UZ on March 20. Translation and photo by John Catalinotto.

Carlo Pereira: The 2009 coup in Honduras made big headlines around the world. How do you assess its consequences now after more than five years? 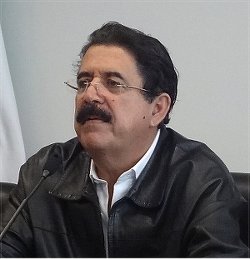 President Mel Zelaya: All indicators show that the situation in Honduras is deteriorating day by day. That means the social, economic, political and security conditions. Since the coup, poverty, debt, corruption and crime have all increased. The people demand real democracy and peace, but this is the last thing those who took power with the coup want to give the people.

CP: How do you see the role of the U.S., the European Union and the individual European states in the preparation of the coup and after it took place?

MZ: Following the coup, the U.S. virtually took over the leadership of the country. It runs the country; the [Honduran] president only manages things and follows the instructions of the U.S. State Department and the Southern Command. The European Union is no longer a defender of human rights. It represents the interests of entrepreneurs and banks; it promotes the free trade agreement. In this sense, the EU has lost much of its standing as role model for a Central American economic alliance that it once had with regard to democracy and human rights.

CP: Do you see a parallel between the coup in Honduras and the current U.S. aggression against Venezuela?

MZ: What these actions show about the U.S. is that it is an intolerant, anti-democratic empire, focused on interventions. The U.S. has no respect for our independence and sovereignty, no respect for the nation-state. The U.S. must correct its policy. In the Middle East, the U.S. has split up the peoples and set them against each other in civil war. Latin America calls out with one voice in defense of the sovereignty of all Latin American nations. The U.S. must stop looking at Latin America as its backyard and begin to respect the social processes that go on in Latin America.

CP: How do you assess the situation and prospects of the progressive forces in Honduras?

MZ: Throughout Latin America, there is a great effort being made. The historical reality moves with ups and downs and is sometimes cumbersome. Absolutely no one will be able to constantly keep humanity from fighting for equality, freedom and solidarity. No one can prevent the people from doing this. The movement can be delayed, but it is a mistake for the U.S. to try to stop the process of democratic socialism in Latin America.