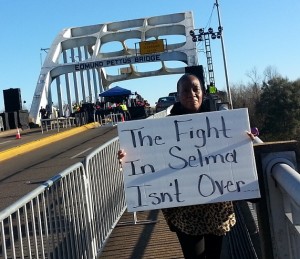 Selma, Ala. — Among the many tens of thousands of people who marched in a sea of humanity across the Edmund Pettus Bridge on March 8 were some of Selma’s heroic freedom fighters of today.

They are the workers at Lear Selma, a plant owned by a Fortune 500 company that pays poverty wages and produces car seats for multinational auto giant Hyundai. Its nonunion assembly plant in nearby Montgomery, Ala., employs 3,000 workers.

Between Selma and Montgomery along U.S. Highway 80 — the route of the historic 1965 march following “Bloody Sunday,” which forced the passage of the Voting Rights Act — are several small auto parts plants that supply Hyundai.

The largely female, African-American workforce at Lear Selma say that the chemicals used in the production of the foam cushions are making them sick. They charge the company with failure to provide sufficient ventilation and protective gear, resulting in chronic asthma, bronchitis and other respiratory illnesses.

In addition, production workers make $12 an hour or less despite the fact that some have worked there for 10 years, since the opening of the plant. In 2008, they filed a lawsuit over wage theft, proving that the company had failed to pay them overtime. They are actively organizing to join the United Auto Workers union.

On March 7, a delegation of Lear workers, faith leaders and other supporters travelled Highway 80 to Hyundai’s corporate headquarters in Montgomery to personally deliver a letter detailing the hazardous working conditions and poverty wages paid by Hyundai’s supplier. The workers were callously turned away by company security, which refused to even deliver the letter.

During the many workshops and programs held in conjunction with the 50th anniversary commemoration of the 1965 march, these brave workers told their story, making it clear that the fight for jobs and justice continues today in Selma. In a town of less than 20,000, some 40 percent of the population lives below the poverty line. This includes many of the workers at Lear Selma.

For additional information, see the Facebook page, “Who Really Made Your Car?”