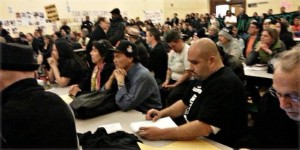 Amilcar Pérez-López, 21 years old and a Guatemalan immigrant, was killed by two undercover San Francisco police officers in front of his home in the Mission District on Feb. 26. Cops claimed he was attempting to steal a bicycle and did not drop a knife he was holding. Neighbors say he was actually trying to retrieve his cell phone, could barely speak English and had already dropped the knife before he was shot and killed.

The San Francisco Police Department held a town hall meeting on March 2 to attempt to win the public to their side of the story. The crowd that turned up at the elementary school where the meeting was held rejected the cops’ fictions. Speaker after speaker denounced the undercover cops, notorious in the community, and challenged the need to use lethal force. The mother of Jamaican-born O’Shane Evans, killed by the SFPD last October, spoke angrily about the treatment of immigrants and the SFPD’s callous disregard for human life. Following the town hall meeting, on March 7, both a vigil for Amilcar and a march against this latest police killing were held.