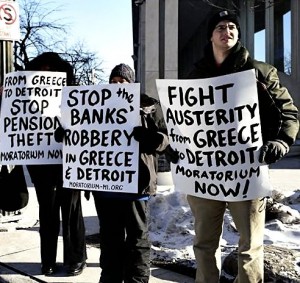 Some of the protesters outside Chase Bank, Feb. 27.
WW photo: Kris Hamel

Detroit —  Activists with the Moratorium NOW! Coalition demonstrated in bitterly cold weather in front of Chase Bank here to show Detroiters’ solidarity with the people of Greece. The protesters demanded: “From Detroit to Greece, stop attacks on the working class; cancel the debt; stop pension cuts, foreclosures and water shutoffs.” This action against austerity took place downtown on Feb. 27, the day severe cuts to city of Detroit retirees’ pensions went into effect.

The working class in Greece has been suffering for five years from a capitalist depression exacerbated by austerity and economic strangulation imposed at the behest of the banks and financial institutions.

A Moratorium NOW! press release stated: “Austerity in Greece has meant conditions much like those faced by Detroiters: A poverty rate of 44 percent, up from just 3 percent in 2009; a 27.7 percent unemployment rate; and 240,000 people with their utilities shut off. In response to these conditions, Syriza was elected to office in Greece on a promise to end the austerity imposed on the working class by the banks and the Troika (the European Commission, European Central Bank and International Monetary Fund). U.S. financial institutions have swindled huge profits off the backs of the people of Greece, Detroit and around the world.”

The largest municipal bankruptcy in U.S. history concluded last year in Detroit, all for the benefit of the banks and to the detriment of workers, retirees, residents and social services. The city was devastated by the actions of banks and financial institutions, some of which are also strangling Greece.

In Detroit, these usurious swindles caused mass home foreclosures and evictions, the exodus of almost one-quarter million residents in only a decade, the robbery of municipal retirees’ pensions and health care benefits, and in 2014, the shutting off of water to more than 30,000 people. Now some 62,000 homes face tax foreclosures.

Moratorium NOW! noted:  “The banks and their capitalist allies are trying to economically strangle Greece, refusing to renegotiate loans and threatening to cut off Greece from the international market. They forced Syriza (Coalition of the Radical Left) leaders into a temporary deal where promised funds would be released in exchange for the new Greek government pulling back on most of its anti-austerity plans and ceding approval over future measures to the Troika. But this deal is bound to collapse as it offers no real relief to the Greek working class. …

“It’s time to draw the line against the criminal banksters and to say PEOPLE come before profits. We’ll beat them back in Greece and across the world, and reverse the attacks on Detroiters imposed by emergency management and the state in service to the banks.”