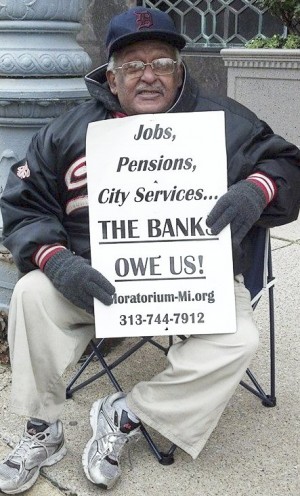 One of many protesters outside federal bankruptcy court, Oct. 28.
WW photo: Kris Hamel

Pension cuts to 32,000 retired city of Detroit workers went into effect March 1. Federal Bankruptcy Court Judge Stephen Rhodes had ordered the slashing of pensions following over one year of court proceedings in the largest municipal bankruptcy filing in U.S. history.

The cuts varied from 6.75 percent to over 22 percent, in addition to an earlier elimination of all city-funded medical, dental and vision care for retirees. It has been reported that retirees are being forced to pay for about 80 percent of the city’s $6 billion to $8 billion debt reduction. Meanwhile, the city continues to pay 100 percent on almost all its debt to the biggest banks.

First cut was the pensioners’ 2014 cost-of-living payment. That amounted to 2.25 percent that will no longer be paid annually, which is estimated to be an 18 percent reduction in pensions over a retiree’s lifetime. Then a general 4.5 percent reduction was shaved off the monthly checks. Finally a “recoupment of excess earnings” will take up to 15.5 percent from the pensions of retirees who saved money weekly from their checks. The city went back to 2003 to reduce the amount already paid in interest to those enrolled in the annuity savings plan. This recoupment will continue for at least 18 years.

Retired bus driver Joyce Griffin-Sole, for example, had her pension reduced from $1,279 a month to $1,076, about a 16 percent cut from a relatively small pension.

Anger among retired workers and their survivors continues to build, months after the “Plan of Adjustment” was finalized in court. Protests inside and outside the federal court were ongoing even before the 2013 bankruptcy proceedings started, led by the Stop Theft of Our Pensions Committee and Moratorium NOW! Coalition.

A new formation, the Detroit Active and Retired Employees Association, has been in the forefront in recent months. DAREA reports that many retirees feel they were misled by union leaders and older retiree associations into false hopes that the court actions would not affect them so much. These retirees are now packing DAREA meetings.

In January, DAREA filed a last-ditch appeal against the pension cuts in federal court, to be argued by rank-and-file retirees.

On Feb. 25, Judge Rhodes and former emergency manager Kevyn Orr spoke to a dinner honoring them as “2014 Newsmakers of the Year,” sponsored by Crain’s Detroit Business. DAREA protesters massed across from the entrance for an hour as guests arrived, chanting “The banks got bailed out! We got sold out!” and “Hands off our pensions! Make the banks pay!”

Banks’ tool: ‘We could have taken it all’

At one point, Orr, the overpaid tool of Wall Street, came across the street shouting at the retired workers: “We could have taken all of your pensions!” For a moment, it looked like violence might erupt.

Judge Rhodes showed his larger aim in allowing constitutionally protected Michigan public pensions to be slashed using federal bankruptcy law. “Other cities need to consider moving away from costly pension plans and transition employees on to 401(k)-styled defined contribution retirement plans,” he declared. (Detroit News, Feb. 25) Defined contribution plans pay huge fees to Wall Street firms to administer individual accounts. They also hold the danger that workers would have little or nothing to retire on if and when the stock market crashes.

From the beginning of the bankruptcy, warnings were issued by protesters that Detroit was just the beginning and that, if the bankers were successful here, pensions across the country would fall victim to looting by Wall Street, with the cooperation of the federal courts. An article on the front page of the New York Times Business Day section of Feb. 26 confirmed this, beginning: “First in Detroit, then in Stockton, Calif., and now in New Jersey, judges and other top officials are challenging the widespread belief that public pensions are untouchable.”

In Stockton, the city itself did not even try to go after pension funds in its bankruptcy. It was Federal Judge Christopher Klein who attacked the California Public Employees Retirement System and “went on to cite steps that struggling cities in general should take to trim their pension costs” through the courts.

None of the ruling class, however, will explain why cities and states are in financial crisis. The role of the biggest Wall Street banks and corporations in foisting fraudulent home loans targeting inner cities and seniors has caused a vast reduction to the tax base of many cities and towns. The federal government bailed out the banks to the tune of at least $1 trillion and took over the properties in millions of foreclosures that resulted from the criminal bankers’ actions.

These same banks also trapped many municipalities into high-interest loans and “bond swaps” that jacked up the debt. Then, when it became difficult to pay on this ballooning debt, the courts and bankers conspired to loot the one place there is still some money stored: public workers’ pension funds.

Only a massive national fightback against the banks, the corporations and their tools in government and the courts can hope to stop the destruction of pensioners and the other victims of the capitalist system.