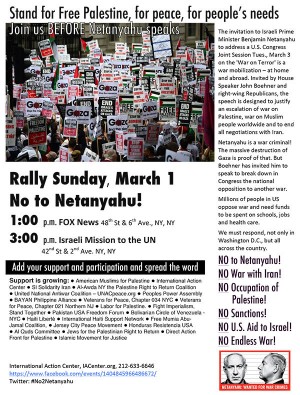 He won’t be the first war criminal to speak before the U.S. Congress. Remember that George W. Bush delivered eight State of the Union messages, most of them after he lied his way into a criminal war that killed 1 million Iraqis.

No, what distinguishes current Israeli Prime Minister Benjamin Netanyahu’s invitation to address Congress on March 3 is that every possible outcome for it — unless it boomerangs — is reactionary and aimed at pushing a new U.S. war against Iran.

Netanyahu — whose hands are still dripping with the blood of Palestinian children, victims of the bombing of Gaza he ordered last summer — appears to have two goals.

One goal is the narrow one of helping himself win the upcoming national elections in the Zionist settler-state, a goal unworthy of discussion.

The other goal is to disrupt the years-long negotiations between the Barack Obama administration and the government of Iran regarding Iran’s program to develop nuclear power.

Netanyahu has urged the U.S. to take military action against Tehran instead of reaching an accommodation. In this he has the support of the the Democratic Party’s cold warriors and most Republicans, who also say they prefer bombing to negotiating. Republican House Speaker John Boehner invited Netanyahu without clearing it with the White House, making the invitation part of the Republican confrontation with the president. In turn, top administration officials are refusing to meet with Netanyahu.