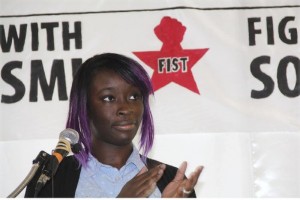 On Feb. 26, 2012, unarmed Black teen Trayvon Martin was murdered by a neighborhood vigilante. On July 17, 2014, the murder of unarmed Eric Garner by the New York City Police Department was videotaped, with his last words being “I can’t breathe.” Yet on Dec. 2, the grand jury decided to only indict the man who filmed the murder. On Nov. 24, Officer Darren Wilson was not charged with the fatal shooting of the unarmed Black teen, Michael Brown, back in August. On Nov. 22, 12-year-old Tamir Rice was murdered by Cleveland police for playing with a toy gun. The officer has yet to be charged.

It is no surprise that a country built on the genocide and enslavement of Black and Brown bodies does not indict white officers for the systematic lynching of Black men. Even though communities of color repeatedly experience violence from the white supremacist system, retaliation to state violence with violence is not accepted. To believe in the fallacy of nonviolence as an effective response is to make the horrifically incorrect assumption that the playing field is equal, and that we can simply negotiate our way through this injustice.

No matter how many times I wish it were true, the fact exists: Black lives do not matter in this white supremacist, capitalist society. The social role of the police is to maintain the status quo; contemporary “law enforcement” evolved from the institution of the capture, containment and policing of chattel slaves. Through the decades of work done by the Abolitionist and Civil Rights movements, the Black community has gained access to certain rights and privileges not previously afforded it, but the recognition of our humanity has only rearranged the type of systematic, barbaric violence we receive from our oppressors, the capitalist system of the United States.

Certain bodies are fundamentally ineligible for personhood, for personhood is not defined by our status as living beings but through our relationship to the racist West. The dominant narrative in our society perpetuates the anti-Black perception of young Black men as innately violent. The racist and inaccurate correlation between the color of his skin and the supposed threat perceived by white officers must be acknowledged if we want to begin to understand why our people are disproportionately murdered.

The country’s increasingly militarized police force is conditioned to see Black men as criminals so as to justify the lynchings. Michael Brown was Black, therefore he was not white. Black bodies are sites of criminalization, for even unarmed, he was perceived as a threat. Even after his death, Brown was not given justice, for the system was never meant to include him.

Amidst this sadness, it is crucial not to forget the violence experienced by Black women. As we have seen, dominant discourses often neglect the intersectionality of oppression, and both whites and men are guilty of reshaping the voice and presence of Black women, or ignoring our existence in its entirety. In this case, Black women do not fit the normative narrative of bodies impacted by police brutality, despite the many Black women who have died at the hands of the system.

We witness the same brutal, perpetual, white supremacist violence and “invisibilizing” of our existence, yet lack of inclusion of Black women devalues our lives.

Shereese Francis, 30 (New York, 2012) — suffocated by police holding her face down on a mattress. She suffered from schizophrenia.

Sharmel Edwards, 49 (Nevada, 2012) — unarmed with her hands up, five police officers shot her with at least
15 bullets.

Rekia Boyd, 22 (Illinois, 2012) — shot and killed instantly by off-duty officer Dante Servin while hanging out with friends in a park.

Yvette Smith, 47 (Texas, 2014) — single mother shot by police. Though they claimed she had a weapon, nothing was found at the scene, and the officers were punished for altering their story to reflect this fact.

This list is by no means extensive, but it serves as a horrific reminder that we, Black women, are not immune to this violence.