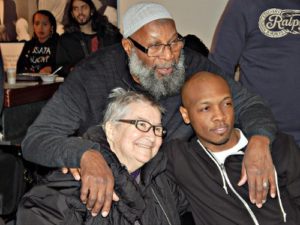 In spite of freezing weather, hundreds of people filled the auditorium of The Malcolm X and Dr. Betty Shabazz Memorial and Educational Center in Harlem, N.Y., on Feb. 15, to see former political prisoner Sekou Odinga. This welcome home celebration follows his release from a U.S. prison on Nov. 25, after serving a 34-year sentence.

Sekou was honored for his role in the Black Panther Party, the Black Liberation Army, and for being a Muslim, New Afrikan and prisoner of war.  He was unjustly framed on six counts of attempted murder of police for  “fighting for the freedom of Black people and the building of the Republic of New Africa.” (sekouodinga.com)

Odinga was targeted by Cointelpro, the FBI’s infamous counterintelligence program, which was aimed at the Civil Rights and Black Liberation movements, and other political movements in the United States from the mid-1950s up through 1971.  When he was captured in 1981, he was tortured.  Odinga was convicted in 1984 and sentenced to a prison term of 25 years to life.

Sekou Odinga spoke and thanked his attorney, Lynne Stewart, who was present at the event, and he mentioned that she had been a political prisoner, too.  He also thanked his long-term supporters.  “Don’t forget those still behind the walls.  They paid the price,” he emphasized.

The “Welcome Home for Sekou Odinga” statement points out: “These are people who dedicate their lives to the transformation of this country, who put the benefit of their communities ahead of themselves, who believed that transformation was not only possible, but was worth dying for to end brutality, racism, economic discrimination, imperialism and war.”

The program was hosted by Hakim Green and featured several speakers, including a Palestinian woman prisoner, spoken word and hip-hop performances, and two documentaries.

This event was organized by the Sekou Odinga Defense Committee, “Existence is Resistance” and the Campaign to Bring Mumia Home.  For a list of performers and supporting organizations, see sekouodinga.com.