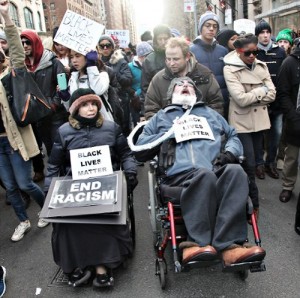 A case before the U.S. Supreme Court which seeks police exemption from the Americans with Disabilities Act has critical importance for all those seeking to stop unwarranted police killings. This case involves police shootings of people with mental illness.

The city of San Francisco brought the case of Sheehan v. San Francisco to the high court. Oral arguments are set for March 23. More than 40 civil rights and disability activist groups have signed a letter urging San Francisco officials to drop its appeal. They warn that the appeal imperils the 1990 Americans with Disabilities Act, “the most comprehensive civil rights law for Americans with disabilities.”  They ask that concerned people join this write-in campaign.  (Bazelon Center for Mental Health, Jan. 12)

Half of people killed by police have mental health disabilities

The ADA mandates accommodations for those with disabilities and applies to every interaction between government and people with disabilities.  It would be especially chilling if police are exempted from the ADA. Even with the law in place, “at least half of the people shot and killed by police each year in this country have mental health problems,” states a 2013 report by the Treatment Advocacy Center and National Sheriffs’ Association, which assessed data from 1980 to 2008.  (“Justifiable Homicides by Law Enforcement,” TACReports.org)

In many cases, it was police who responded to requests for assistance from family or neighbors to get an individual mental health care. Many of those involved were people of color.

In San Francisco, the toll is even higher. A KQED radio review of 51 San Francisco police-involved shootings between 2005 and 2013 found that 58 percent — or 11 of 19 individuals killed by police — had a mental illness that was a contributing factor in the incident.

San Francisco seeks to overturn a Ninth Circuit U.S. Court of Appeals ruling which said that San Francisco police violated the ADA in the 2008 shooting of a woman in psychiatric distress whom they were called to help.

Teresa Sheehan, a woman in her mid-50s with a history of psychiatric disability, was off her medication and in the midst of a psychotic episode. She had barricaded herself in her room at her group home residence with a knife in her hand. Her caseworker, Heath Hodge, who was there, called police for help in transporting her to a mental health facility for involuntary commitment and treatment.

The SFPD had a team capable of responding to individuals in psychiatric distress and trained in de-escalation techniques to get people the care they needed.  Instead of waiting for backup from this team, two police officers entered Sheehan’s room with guns drawn and shot her five times, including in the face.

The force was deadly, but Sheehan survived. She sued and successfully argued that the ADA applied to her interaction with police, so they are liable for civil rights violations as they did not take her mental disability into account.

The question now before the Supreme Court is not whether the police were right or wrong. It is simply about Sheehan’s right to proceed with a civil suit against police for failing to accommodate her disability. This case could have implications for how police conduct themselves in a wide range of scenarios, including the many in which police officers shoot someone who is not carrying anything that could be construed as a weapon.

While disability groups are concerned about the situation in San Francisco, of much greater concern is that the Supreme Court is likely to go much further in its ruling than even what San Francisco requests. Pointing to the gutting of the Voting Rights Act by the current high court, disabilities activists are trying to get San Francisco to drop the appeal and to resolve the matter locally.

ADA:  Most important legal protection for people with disabilities

Susan Mizner, a disability counsel with the American Civil Liberties Union, recently stated: “Many people recognize the names Eric Garner, Michael Brown and Tamir Rice, all African Americans killed by the police.  Less well known are the names Milton Hall, James Boyd, Ezell Ford, Kajieme Powell and Tanisha Anderson.  They are people with psychiatric disabilities — most of them people of color — shot and killed by police.  In many cases, police were responding to requests for assistance to get the person mental health care.” (“There Is No Police Exception to the Americans with Disabilities Act,” ACLU.org, Jan. 8)

Jessie Lorenz, executive director of the Independent Living Resource Center San Francisco, stresses in the Jan. 20 San Francisco Examiner: “The highest court in the land is poised to decide the case based on the following question: ‘Does the ADA apply during encounters with the police?’ Frankly, even asking the question is a miscarriage of justice.  The ADS is a nondiscrimination law that is always in effect.  It was designed to provide broad protections for some of the most vulnerable and gravely misunderstood people in society. [This] suit could open the floodgates to weakening the only protection people with disabilities have.  This is incredibly dangerous.”

Lorenz concluded with this appeal: “The disability community cannot allow this to happen.  We are organizing a public commitment campaign. I urge you to join us by writing to Mayor Ed Lee and [City Attorney Dennis] Herrera and demanding that they heed the call of civil-rights advocates and San Franciscans alike by dropping the appeal.”