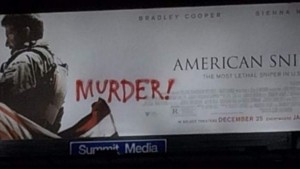 Try to imagine this movie: Iraq’s urban population, angered by a foreign invasion, mobilizes to resist an army of occupation. The robocop occupation troops are weighed down with body armor and heavy weapons. They drive armored Hummers decorated with death heads and kick down doors to invade Iraqi homes. Young Iraqis wearing tatters risk death to challenge the robocops. Whole families support this resistance.

If you already understand U.S. imperialism’s crimes in Iraq, that’s what you might take away from the movie, “American Sniper.” But many viewers, unaware of the truth behind the war, receive a distorted message. Directed by Clint Eastwood, the film looks at the events only through U.S. eyes. It twists the truth, falsifying historical context while adding poisonous anti-Arab bigotry.

Because this film is a box-office hit and is being pushed for multiple Academy Awards, including best picture, it is a weapon in the hands of the Pentagon generals planning future wars, from Iraq to Ukraine to Somalia to Venezuela. Workers World urges its readers who know the truth about the U.S. war on Iraq to confront the film wherever possible.

The movie’s central figure is Chris Kyle, a real sniper whose memoir is the basis for the film. In the film version, Kyle starts out as a Texas cowboy, gets patriotic upon seeing the 1998 bombings of U.S. embassies in Tanzania and Kenya on TV, and enlists as a Navy SEAL.  After seeing the World Trade Center collapse on TV, Kyle aches to leave his beautiful, pregnant wife and fight in Iraq, where he returns for four tours totaling 1,000 days and makes 160 “confirmed kills” of those he considers “savages.”

Most of the Pentagon’s million “kills” in Iraq were done with drones, bombs and rockets, from wrecking the infrastructure and sowing sectarian civil war. Kyle’s kills are up close and personal. In other words, like the earlier Rambo slaughtering Vietnamese, he’s a racist serial killer on steroids.

The U.S. Marines and Navy SEALs kicking down doors kill dozens of Iraqis for each U.S. troop killed. But the film shows how the bodies and minds of U.S. troops are also damaged by warfare. When they come home, many can’t cope — and they get little psychological support.

The context Eastwood omits is that these troops’ political leaders have lied to them about Iraq, which had no connection to the bombings in Africa or with 9/11. In the real world of 2002-2003, the George W. Bush administration lied hundreds of times, claiming Iraq had ties to terrorists and held “weapons of mass destruction.”

Bush lied so that people like Kyle would risk their own necks for the billionaires, bankers and oil magnates who rule the United States and wanted to conquer Iraq. Today, the Pentagon uses a movie like this one to deceive U.S. youth into thinking a career in the armed forces defends their families and neighbors.

Despite some hints of disillusionment with the war among Kyle’s buddies, “American Sniper” is just another example of typical Hollywood war propaganda. From early racist “Cowboy and Indian” movies through the Rambo films of Vietnam to today, these movies slander “the enemy” as inhuman brutes.

If the audience could view the film through the eyes of the mass of ordinary Iraqis who defend Fallujah, Ramadi and Sadr City from the U.S. occupation troops, they could get closer to the truth of this criminal, genocidal U.S. war.

Eastwood once made a pair of films about the U.S. war with Japan. “Flags of Our Fathers” tells of the battle for the strategic island of Iwo Jima from the U.S. viewpoint, while “Letters from Iwo Jima” tells the same story from the Japanese side. But don’t hold your breath waiting for Eastwood and Hollywood to make a sequel showing the Iraqi viewpoint. Speak out against “American Sniper” and make it part of an anti-war debate.