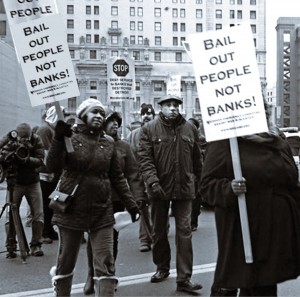 Detroit, Feb. 1 — When the Troika — the International Monetary Fund, European Commission and European Central Bank — disbursed 226.7 billion euros to Greece between May 2010 and the present, European capitalists and politicians spoke of these funds as if they were a gift to the Greek people. In reality, the funds went almost exclusively to bailing out the banks, provided little benefit to the people and increased Greece’s public debt.

Especially significant is that the banks and financial institutions which held the Greek debt before 2010 were essentially paid off and bailed out. As a result, 65 percent of Greek debt was shifted to the public sector, making other eurozone governments now liable for it. Another  20 percent is in the hands of the ECB and IMF.  (“The troika saved banks and creditors — not Greece,” tinyurl.com/kbxvzt9.)

This is very similar to the U.S. bank bailout that began in 2008, in which the U.S. Treasury and Federal Reserve bought up several trillion dollars in bad bank debt, particularly mortgage securities, and backed them up with U.S. taxpayer funds through Fannie Mae and Freddie Mac.

As a result of the Troika’s “bailout,” Greek government debt has grown from 133 percent of the country’s gross domestic product in 2010 to 174 percent today. (“Six key points about Greek debt and the forthcoming election” by Tim Jones, Senior Policy and Campaigns Officer, Jubilee Debt Campaign, January 2015.)

However, the study by Mouzakis, cited above, notes that beginning in 2013 and continuing until today, Greek government revenues have exceeded expenses, with no financing needed to cover state operations.  If Greece did not pay off its debt to the Troika — and through the Troika to the banks and financial institutions — it would be able to maintain its operations and likely increase services to the people, which have been devastated to provide the funds to pay off the banks. Canceling the debt to the banks, instead of hobbling Greece, would likely raise the people’s standard of living.

Wall Street played its own role in creating the Greek financial crisis, while profiting from it. In 2001, the investment banking firm Goldman Sachs engineered a deal with Greece that allowed the country to mask its real deficit in order to adopt the euro as its currency.  Goldman Sachs engineered a “derivative” — a cross-currency and interest rate swap — in which it advanced 2.8 billion euros to Greece to eliminate 600 million in euros owed by Greece at the time.

By 2005, when Goldman Sachs sold the swap to the National Bank of Greece, the amount owed by Greece had mushroomed to 5.1 billion euros. In addition, Goldman Sachs pocketed a $300 million fee for engineering this deal. (New York Times, Feb. 14, 2010)

Goldman Sachs underwrote similar swaps for the city of Detroit, which cost the city $365 million in termination fees on swaps tied to pension obligation certificates, and $537 million on swaps tied to water infrastructure bonds.