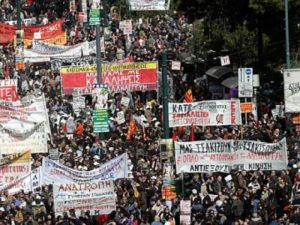 Voters in Greece’s Jan. 25 parliamentary election rejected the harsh, devastating capitalist austerity program imposed, for the past six years, by the European Central Bank, the International Monetary Fund and the European Commission on the working class in that country.

This first electoral defeat of austerity in all of Western Europe opens up a new stage in the struggle continentwide, especially in countries like Spain, Portugal, Ireland and Italy, where unemployment rates have ranged from 12 to 25 percent since 2010, and workers have been under fierce attack from the bankers and bosses.

Syriza, a Greek party whose electoral appeal grew enormously in the past few years, came in first with 36 percent of the popular vote and 149 of the 300 seats. Syriza’s leader, Alexis Tsipras, was named premier Jan. 26. Parties opposing austerity topped 52 percent of the vote.

The two parties — New Democracy and Pasok — that had formed the previous government and had accepted and defended the policy of austerity, faced a crushing defeat. Together, they got only 33 percent of the vote.

The reasons for the popular anger over capitalist austerity run deep. Jobs have vanished: the official unemployment rate in Greece is 27 percent, 50 percent for youth under 30.  Wages, including the minimum wage, have been slashed along with pensions and health care.  Hunger has increased along with suicides.

The governments have raised taxes and fees rapidly and unpredictably, but Greece’s total tax income has fallen since the national economy has been rapidly declining. Greece’s output of goods and services is now only two-thirds what it was in 2007.

While European bankers and regimes touted austerity as the only way to solve Greece’s financial crisis, its debt actually increased.  Bankers bought Greek bonds at 10 percent interest after they knew the IMF and the ECB were backing them.

With 149 seats leaving it two short of a majority, Syriza brought in a small, right-wing but anti-austerity party called the Independent Greeks as a coalition partner so it can form a government.

In a speech in front of the University of Athens, Tsipras called the vote result “a victory for all peoples of Europe fighting austerity.” He went on to say, “It cancels the memorandums” that enforce Greece’s international loan agreements.  He  proclaimed that his government would negotiate a fair “mutually beneficial agreement,” raise the minimum wage to its previous level and cut taxes on the middle class. (Ekathimini, Jan. 25)

Many leaders of left-social-democratic and “Eurocommunist” parties in southern Europe attended Syriza’s concluding rallies, including Pablo Iglesias of Spain’s Podemos Party, Jean-Luc Mélenchon of France’s Parti de Gauche and Pierre Laurent of the French Communist Party.  Syriza supporters in the Greek diaspora held meetings and rallies leading up to the vote and celebrations afterwards.

The European bankers and imperialist economists have announced they will resist any major debt restructuring. Johan Van Overtveldt, Belgium’s finance minister, told a Belgian TV channel: “We can talk modalities, we can talk debt restructuring, but the cornerstone that Greece must respect the rules of monetary union, that must stay as it is.” (AP, Jan. 25)

Europe is in the midst of a financial crisis, which has had a major impact on Greece. This crisis has led the European Central Bank to announce a program of “quantitative easing,” which will involve buying 60 billion euros worth of bonds for the next 18 months.

But the German government insisted on imposing conditions that will keep Greece from getting any ECB funds designed to restart economies threatened by deflation, unless Greece continues to meet the restrictions imposed by its bailout. (Financial Times, Jan. 22)

The Greek government and its new prime minister, Alexis Tsipras, are facing a difficult challenge: how to restart the economy and improve people’s lives under the threat of a huge debt that bankers insist they pay.

Syriza is a new party, just coalescing as an electoral coalition in 2004 and not formally becoming a party until 2013.  It is an amalgam of  so-called democratic socialists, left-wing populist and green left groups, as well as Maoist, Trotskyist and Eurocommunist groups that split from the Greek Communist Party (KKE) in the 1990s. Despite its electoral appeal, Syriza has little influence in the union movement, where the KKE is strong.

(The January 2015 issue of the magazine The Jacobin has a detailed article dealing with the history of the factions inside Syriza.)

While Syriza will hold government office, Greece’s finances will still be subject to European, especially German banks. And the Greek state — the army, which made a coup in 1967 that lasted seven years, and the police — still answers to NATO and the Greek ruling class. In addition, there is the threat from an anti-immigrant fascist party, Golden Dawn, which got 6 percent of the vote even though its leaders were running for parliament from jail.

To confront these obstacles, the Greek workers not only will need to mobilize for struggle but will also need the solidarity of workers throughout Europe and the United States.