Below are reports from several cities about marches and rallies on Jan. 19, the official holiday in memory of the Rev. Dr. Martin Luther King Jr. This year, outrage at the epidemic of unpunished police murders was reflected in the large and militant participation of young people of color. 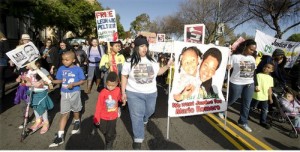 Upwards of 7,000 people marched on Jan. 19, the culmination of 96 hours of direct actions in the San Francisco Bay Area to reclaim the legacy of Dr. Martin Luther King Jr. Starting with a rally at Grant Station (Fruitvale BART, renamed in honor of Oscar Grant), a several-mile march led by children wound through Oakland’s eastside neighborhoods to the planned site of a development called Coliseum City.

Dubbing it a “March for Jobs & Economy,” organizers from the Anti-Police Terror Project made the connections between police violence and economic violence. An APTP press release said, in part: “We know well the grief that comes when brothers, sisters, sons, daughters, mothers and fathers are gunned down by those who are supposed to ‘protect and serve.’ We march to reclaim King’s legacy and demand an immediate end to the war being waged on Black people in America.”

The APTP has developed a number of demands around Coliseum City. They include: a local hiring policy that ensures 50 percent of the jobs go to Black people and those disenfranchised because they are on probation and/or parole; a Health Impact Assessment that lays out how many Oakland residents will be displaced as a result of this development and other undesirable outcomes; and a commitment to providing living-wage jobs with benefits to all employees of the Coliseum City project, from janitors to retail clerks.

The APTP is a project of the ONYX Organizing Committee. In coalition with other organizations, like the Community Ready Corps, the Alan Blueford Center for Justice, Workers World Party, Healthy Hoodz and the Idriss Stelley Foundation, it is working to develop a replicable and sustainable model to end police terrorism in this country. 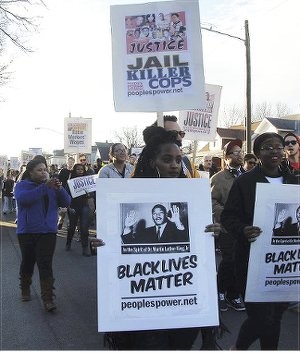 This year’s march took on a far more militant tone than prior ones. This is partly in response to the recent movement against racist police terror that targets people of color and partly to the capitalist economic system not being able to provide a humane and dignified existence to the masses of working class and oppressed peoples throughout West Virginia and Appalachia at large. Marchers enthusiastically hoisted signs with slogans connecting these struggles: “Stop the racist war on youth. We need union jobs and free education,” “Dismantle the police state” and “Dr. King’s dream: End poverty, raise workers’ wages.”

An African-American woman told this writer that West Virginia has no street named after Dr. King. Referring to the late Sen. Robert C. Byrd, she sarcastically exclaimed, “But we sure have enough buildings named after that racist KKK leader!”

Atlanta: ‘Which side are you on?’ 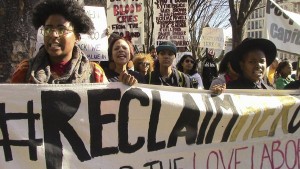 “Black Lives Matter” rang out from the pulpit of the famed Ebenezer Baptist Church to the streets of Atlanta on Jan. 19. That phrase was repeated in the impassioned remarks of Dr. Martin Luther King Jr.’s daughter, Rev. Bernice King, at a packed interreligious service and again on the hundreds of signs and banners carried by many marchers in the annual parade.

In addition to contingents of union members, faith groups, students, progressive and community organizations, this year the youth injected creative and bold actions into the march in response to the police killings of Michael Brown, Eric Garner and others.

With their mantra of “We have a duty to fight for our freedom, we have a duty to win,” they dramatized the staggering impact on communities of color of police terror, mass incarceration, poverty and joblessness by staging several die-ins during the route to the King gravesite.

They sought to bring forth the legacy of the Martin Luther King Jr., who marched and confronted police and other racist authorities, was arrested and jailed, and disrupted the status quo, to the dismay of other leaders.

Led by many young women of color, they raised the role of Black women in the struggles of the past and present. Their signs named Black and transwomen also killed by the police.

Upon reaching the end rally site on Auburn Avenue, in front of the graves of Dr. King and Coretta Scott King, they marched to the stage where Aurielle Marie, the young woman who initiated #ItsBiggerThanYou, delivered a powerful speech describing the intense conditions facing youth that compel them to rise up and fight back. She called for support, especially from the veterans of past struggles, and closed by asking, “Which side are you on?” 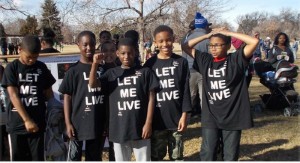 Denver’s annual MLK Day march was the largest, most serious and struggle-oriented in years, with as many as 50,000 marchers. Most were youth, who sang, chanted and lay down in the street during a die-in.  Reclaiming Dr. King meant there were no speeches by politicians, expensive sound equipment or television screens.

In addition to  community organizations, there were members of the Black Buffalo Soldiers, African-American Rodeo, the ACLU, NAACP, Jewish groups, numerous churches, teachers and high school students. There were signs relating Palestine to Ferguson, Mo. Some protesters carried painfully personal signs about arrests, shootings and jailings of Black men by police.

One of the largest MLK Day marches in recent years — between 5,000 and 10,000 multinational demonstrators — took place in Seattle on Jan. 19.

Marching from Garfield High School in the Black community to the Federal Courthouse downtown, the demonstration protested the regime of racist police violence both locally and nationally, from Ferguson to New York.

A rally with entertainment was held in the morning after 16 workshops covering many political organizing, community, economic and labor issues. Then the march took off, stopping at two different jails. At the juvenile jail, a rally was held to protest the school-to-prison pipeline. Another rally at the county jail focused on the disproportionate number of Black prisoners.

After the final rally at the courthouse, two groups of demonstrators blocked traffic to protest racist police murders. Interstate 99 was blocked in the heart of downtown; the entrance to I-5 was also blocked. Some 19 protesters were arrested.