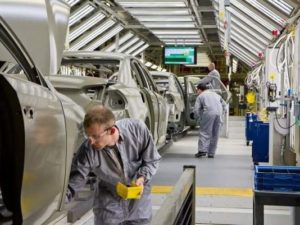 After narrowly losing a union election in the Chattanooga, Tenn., Volkswagen assembly plant in early 2014, United Auto Workers organizers now say a majority of workers have signed union cards. Accordingly, plant management has agreed to grant UAW members meetings with company executives and space for organizing meetings on factory property. Conspicuously absent from the agreement, however, is UAW’s right to collectively bargain on behalf of the workers. Meanwhile, UAW Local 42 has elected a plant president, is holding meetings and is selecting a bargaining committee.

However, VW really complicated matters last November by setting up a so-called “employee engagement” program which recognizes worker organizations with 15, 30 or 45 percent membership. (An independent auditor confirmed that Local 42 has 45 percent.) VW’s plan is remarkably similar to the program that the Tennessee public schools initiated after the state’s 2011 Republican super-majority voted to strip the Tennessee Education Association of collective bargaining rights.

In both programs, workers elect representatives to meet with management and arrive at nonbinding, unenforceable agreements about working conditions and salaries. Also in both programs, anti-union lobbyists working through deceptive front groups compete with union reps for workers’ votes and policy decisions.

In the public school system, one such group is the Professional Educators of Tennessee, which gets big-bucks funding from groups like the National Right to Work Foundation and the American Legislative Exchange Council. A TEA rep told Labor Notes that PET’s role, with one representative on a seven-person panel, has been counterproductive, as it tries to undermine workers’ economic issues on the job. He summed it up as “the next step after right to work” [for less].

In the VW plant, the American Council of Employees, a rebranded version of the group that lobbied against unionization in 2014, is another such well-funded, right-wing, anti-worker, pseudo union.

Reportedly, ACE has barely managed to hoodwink 15 percent of the workforce into voting for them, compared to UAW’s strong majority. UAW organizers and workers say they will continue fighting for authentic union representation. (Dec. 17) Stay tuned.

With a resounding 74 percent majority, workers at the Boston bike-share company Hubway voted Dec. 4 to join Transport Workers Union Local 100. The workers cite unfair wages, dangerous working conditions, and unpredictable and disruptive schedules as their biggest grievances. TWU Executive Vice President John Samuelsen stated, “A union contract will provide them a platform to have real input in giving Boston a world-class bike-share operation, and it will enable us to address current problems, including operational difficulties and safety concerns.” Hubway workers join bike-share workers in New York City, Chicago and Washington, D.C., all of whom recently joined TWU Local 100. (laborpress.org, Dec. 15)

Some 2,600 mental health care workers at California’s Kaiser Permanente hospitals called a weeklong strike beginning Jan. 12. Workers demanded that Kaiser adequately provide for its psychiatry departments, which they say are dangerously understaffed, forcing patients to endure long wait periods in violation of state law. Kaiser was cited and fined $4 million by the state Department of Managed Health Care in 2013 for “serious” and “systemic” violations, but workers say the situation has only deteriorated since then. It often takes three to six weeks after a patient is diagnosed to get a follow-up appointment.

Clement Papazian, rank-and-file president of the National Union of Healthcare Workers Northern California chapter for mental health workers, said in a written statement: “For patients suffering from depression, anxiety, and other debilitating mental conditions, these delays are unbearable. Some have even died by suicide during the lengthy delays. As mental health clinicians, we have an ethical obligation to advocate for our patients.” Workers hope the strike will compel Kaiser, which has a $30 billion bank account, to cough up some bucks to fulfill its obligation to patients. (labornotes.org, Jan. 12)