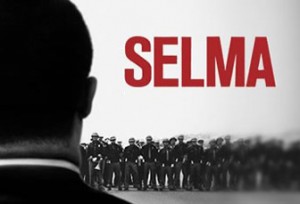 Institutionalized racism in the U.S. comes in many forms — some of it subtle, some not so subtle. The not so subtle, to put it mildly, includes the police murders of Black and Brown people, especially youth, too numerous to mention here. Heroic national resistance to this police terror began on Aug. 10, one day after the fatal shooting of 18-year-old African-American Michael Brown in Ferguson, Mo. This resistance, with all its ebbs and flows, continues today with many protests Jan. 15-19 that honor the struggle legacy of the Rev. Dr. Martin Luther King Jr.

Almost five months after Ferguson, the movie “Selma” opened in limited release. It quickly became one of the top two best-reviewed movies, alongside “Boyhood.” Read our review of “Selma” at workers.org.

The brilliant director Ava Duvernay directed “Selma.” Duvernay made Golden Globe history when she became the first African-American woman nominated for best director. David Oyetokunbo Oyelowo, an actor from a Nigerian family who was born in Oxford, Britain, was also nominated for best actor for his powerful portrayal of Dr. King.

The drama depicts the events leading to the 1965 Selma-to-Montgomery, 54-mile march to pressure the Lyndon B. Johnson administration to pass the Voting Rights Act, which was enacted later that summer. Duvernay paid homage to the role in the struggle for the right to vote of women like Diane Nash, Annie Lee Cooper and Viola Liuzzo.

Despite op-eds attacking the film for alleged historical “inaccuracies,” much of which focused on LBJ’s views on civil rights, there was great anticipation that the film would receive multiple Academy Award nominations, especially for best film, best director, best actor and more.

When the Academy Award nominations were announced on Jan. 15, Dr. King’s birthday, the film only received two nominations: for best film and best original song.

This blatant snub of such an astounding film immediately sent shockwaves of deep anger and chagrin throughout the film industry and among moviegoers in the U.S. and worldwide.

There has been much speculation about why “Selma” was essentially dissed by the almost 6,000-member Academy of Motion Picture Arts and Sciences. For instance, Paramount Pictures did next to nothing to promote the film, even neglecting to send out individual DVDs to the Academy members in a timely fashion.

Many people dismissed the LBJ controversy as bogus, since other biopics — like “Lincoln” — distorted the truth about Abraham Lincoln’s role in freeing enslaved African people. Some even stated that the film came out too late for Academy Award consideration, which doesn’t hold water. Many of the best films are purposely released toward the end of the year so they are easily remembered once film critics’ awards and nominations are announced.

The bottom line is that “Selma” became the latest target of an Academy that to this day is still 93 percent white, 76 percent male and on average  63-years-old. That Cheryl Boone Isaacs, a Black woman, was voted in as the Academy president in 2012 cannot hide the 87-year-old sordid history of the most prestigious institution in Hollywood. The deck was stacked against Duvernay, who is both Black and a woman.

As a result of these statistics, #OscarsSoWhite became the number one hashtag on Twitter on Jan. 15. Not since 1998 have all 20 nominations for best actress, best actor, best supporting actress and best supporting actor included no people of color.

To the left of the Academy Awards are the Independent Spirit Awards handed out the day before the Oscars. To ISA’s credit, this group not only nominated  “Selma” for best film, best director and best actor, but also Bradford Young for best cinematography and Carmen Ejogo for best supporting actress for her unforgettable portrayal of Coretta Scott King.

Workers World urges its readers to hurry — not wait — to experience this astounding film. It truly captures the spirit of Dr. King and the heroic Civil Rights Movement in Alabama that is impacting today’s mass struggle against racism, bigotry and all forms of inequality.

The cast of “Selma” wore “I Can’t Breathe” T-shirts and held their hands up during the protests against police violence and did special screenings of “Selma” in Ferguson and for youth around the country during the King holiday weekend. The cast’s commitment reflects the consciousness of making this history relevant to today’s growing anti-racist mass resistance.