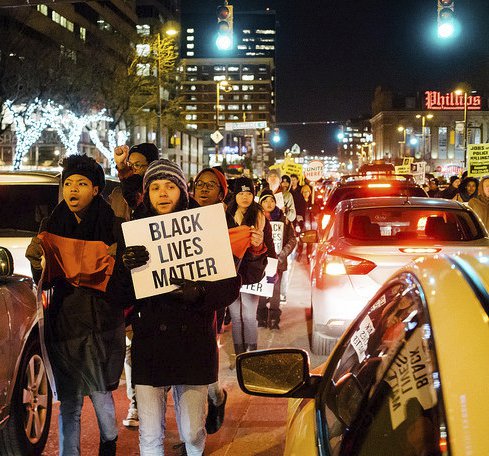 Jan. 16 — A protest march and rally against racist police terror, called “Strike Against Racism,” tied up traffic in the Harbor East shopping area of downtown Baltimore on the evening of Jan. 15, Dr. Martin Luther King’s birthday. Some 400 people voiced their opposition to brutal police tactics, including the arrest of a young organizer just a few hours before the rally began.

Sara Benjamin, 23, the rally’s designated emcee, had been picked up by police at a bus stop in front of the college where she was registering for classes. She was arrested and held on a year-old warrant for a minor misdemeanor — a police tactic that movement activists saw as deliberately meant to obstruct and intimidate that day’s demonstration. 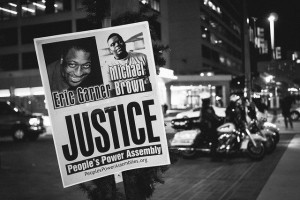 Benjamin, who is African-American, had traveled to Ferguson, Mo., with her five-year-old daughter to support the movement for justice there after the fatal police shooting of unarmed teenager Michael Brown. She came back to Baltimore determined to help build the movement here against racism and police brutality in this highly segregated city.

The morning after the demonstration, march organizer Andre Powell announced a press conference later in the day in front of the Baltimore Solidarity Center to demand the release of Benjamin.

He said it would also “take up our strenuous objections to the growing repression by the Baltimore Police Department against our protests. We strongly assert that the BPD and the city are conducting themselves illegally by detaining protesters in the streets by force and refusing to allow protesters to march to appropriate political targets, whether they be the business district or the police headquarters itself.

“The marchers attempted to get to the police headquarters following our rally at McKeldin Square to deliver a letter to Commissioner Anthony Batts. Huge phalanxes of police prevented that and forced the group into the East Harbor area. At today’s press conference we will present the letter that we were not able to present yesterday.”

Other activists said they would raise the issues of the police impeding their freedom of movement by not letting the march go to the police station and at times surrounding the marchers, not allowing them to move.

The King Day rally was organized by the People’s Power Assembly, Baltimore FIST, and the Baltimore chapter of SCLC. There was good representation from unions, including UNITE HERE Local 7 and 32BJ of the Service Employees. Other contingents marched behind banners of the youth group Fight Imperialism, Stand Together (FIST) and Workers World Party.

Sharon Black, an organizer of the PPA, said, “We will be planning protests at the women’s jail every day until Sara Benjamin is released. We consider her arrest and jailing racist and egregious, and we will not rest until she is out.”