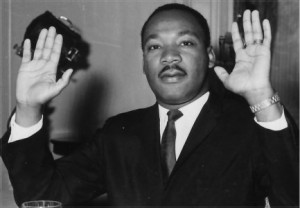 If the great Civil Rights leader Dr. Martin Luther King Jr. were alive today, he would unequivocally lend his name and support to the national protests being called in his honor against racism and especially police terror. Beginning on Jan. 15, the 87th anniversary of Dr. King’s birth, protests will begin all over the country culminating on Jan. 19, the federal King holiday won in 1986 through mass protests.

These four days of demonstrations — be they marches, rallies, direct actions, no work, no school, or forums and other gatherings — are part and parcel of the two-month-old uprising against police brutality that began on Nov. 24 when a St. Louis, Mo., grand jury refused to indict Darren Wilson, a white cop, for murdering Michael Brown, an 18-year-old African American, on Aug. 9 in Ferguson, Mo. The uprising intensified after this racist slap in the face repeated itself on Dec. 3, when a Staten Island, N.Y., grand jury refused to indict another white cop, Daniel Pantaleo, for the chokehold murder, captured on videotape, of another African American, 43-year-old Eric Garner.

Despite the cold, wintry weather, activists, especially the youth, have maintained an ongoing presence with die-ins, school walkouts, blocking of traffic, takeovers of police precincts and other acts of defiance to demand that Black lives matter. The Ferguson National Response Network is centralizing numerous Jan. 15-19 protests from around the country on its website.

In New York City, the People’s Power Assembly, Occu-Evolve and others are organizing a strike against racism on Jan. 15. Various boroughs will be holding actions in the morning, followed by a vigil at the African Burial Ground in lower Manhattan to pay homage to enslaved Africans whose unpaid labor helped build the international financial district of Wall Street. Actions will also take place at 1 Police Plaza and the Manhattan Correctional Center. A rally will be held at City Hall followed by a protest at Grand Central Station, a major transportation hub. Families of murdered police victims will be participating at some of these actions. The Baltimore PPA is also holding a strike against racism on Jan. 15.

Major marches will be taking place in Philadelphia, Detroit, Atlanta, New York and elsewhere on Jan. 19. Go to peoplespower.net for more details.

Regardless of whether one followed Dr. King’s philosophy of nonviolence or not, no one can deny that he was an activist who believed that only the direct intervention of the masses can create real social change.

Dr. King was a firm believer in putting deeds before words. He not only believed in civil rights, but also in workers’ rights. An assassin’s bullet tragically took his life at the age of 39 on April 4, 1968, while he was supporting the right of Black sanitation workers to unionize for better working conditions and a living wage in Memphis, Tenn.

#ReclaimMLK on Twitter reflects the growing national momentum to usher in 2015 as a year of resistance, first and foremost against police brutality but also regarding other issues related to racist repression, like mass incarceration, gentrification and low wages, and challenging the attacks on public education, health care and other basic services.

Workers World Party stands in solidarity with the Ferguson Action Response Network pledge that reads in part: “This pledge is in defense of ALL Black lives. We stand with Black men and women. We act when Black Queer and Trans lives are threatened. We defend the rights of our Black family when we are poor, disabled and incarcerated. I will elevate their names.” (engage.fergusonaction.com)

The legacy of Dr. King will be felt not only Jan. 15-19 but throughout the year.