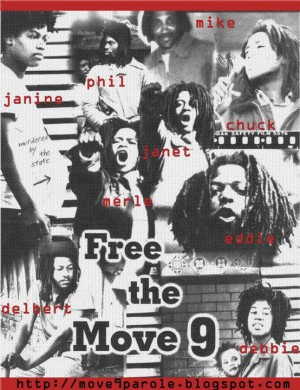 MOVE 9 member Phil Africa died in prison on Jan. 10 under what family members are calling “suspicious circumstances.” Six days earlier, Africa reportedly wasn’t feeling well and went to the prison infirmary in the State Correctional Institution at Dallas, Pa. MOVE members who drove to SCI-Dallas were denied a visit by the prison.

They later learned that Africa had been secretly transported to Wilkes-Barre General Hospital and held there in isolation for five days. Callers to the hospital were told he wasn’t there. The prison and hospital reportedly initially denied Africa the right to call Janine Africa, his spouse of 44 years, on the grounds that she wasn’t a blood relative.

After hundreds of supporters from around the world flooded the phones at the hospital and prison, Phil Africa was allowed to call Janine Africa on Jan. 8. She reported that he seemed heavily drugged, incoherent and had difficulty talking. On Jan. 9, Phil Africa was sent back to the prison infirmary. MOVE members Ramona Africa and Carlos Africa were given permission to visit him on Jan. 10 and found him unable to talk or move his head. He died an hour after they left.

The family says that inmates in the infirmary and prison who saw him before he was sent to the hospital reported that Phil Africa was walking, stretching and doing jumping jacks, and seemed in good health. The inmates expressed shock to see his deteriorated condition after his release from the hospital. The hospital has refused to release information on his medical condition to the family.

Phil Africa was one of nine MOVE members imprisoned in the aftermath of a police assault on their home in the Powelton Village section of Philadelphia in August 1978. During the conflict, a police officer was shot and killed with one bullet; however, all nine MOVE members in the house at the time were charged with third-degree murder. They were each given 30-year to 100-year sentences, even though the average sentence for the charge is 10 to 15 years.

Since 2008, the MOVE 9 have been denied parole because they maintain their innocence and refuse to give any false admission of guilt or remorse, as required by the parole board as a condition for release.

Another MOVE 9 member, Merle Africa, died in prison under similar conditions in March 1998. Apparently healthy in prison, she was nonetheless forced to go to an outside hospital, where she died.

Eleven MOVE members, including five children, were murdered when the government intentionally dropped a bomb on their home on May 13, 1985. MOVE members and supporters will be holding a major 30-year commemoration on May 13 in Philadelphia.

A revolutionary all his adult life despite having two of his children murdered by the system, Phil Africa is remembered as a warm father figure to many in prison.