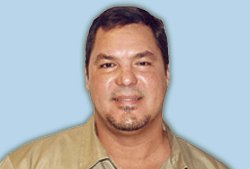 Ashland, Ky. — We sat in the last three seats of the last neat row of red plastic chairs.  It was the visitors’ room of the federal prison here on a rainy but not so cold Saturday morning in December. A door across the room opened and there he was, Ramón Labañino Salazar. Although other prisoners were also joining loved ones and visitors, Ramón filled the room with his warm smile. Strong and tall, he joined us. Elizabeth Palmiero, Ramón’s spouse, graciously shared her precious and limited face-to-face visiting time with me and joined our conversation.

Ramón expressed gratitude to the solidarity movement on behalf of all five of the Cubans arrested on Sept. 12, 1998. He sends five hugs to everyone who contributed to the efforts large and small that have brought us to this point over more than 16 years of struggle. Ramón reviewed the victories won, including the appeals and resentencing that reduced his unbelievable life plus 18 years, to a still wildly excessive 30 years.

Unless you are Cuban, unregistered foreign agents in the U.S. with false identities are usually deported to their home countries. Ramón noted that the U.S. deports many, many people every day.

He credited the  solidarity movement for the victorious appeals and the resentencing that reduced all the vindictive life sentences except the still outstanding double life plus 15 years for Gerardo Hernández. And Ramón stressed once again — at a time when pressure grows on the Obama administration to begin changing its relationship with socialist Cuba — that there will be no settlement without including Gerardo. Ramón said he has asked that all resources that might be used on his behalf be used instead for Gerardo Hernández’s case.

In particular, Ramón viewed the next year, especially the next months leading up to the April 2015 Summit of the Americas, as a critical time to expand the movement that will open the prison doors for Gerardo Hernández, Antonio Guerrero and him.

As with Mumia Abu-Jamal’s commentaries from prison, Ramón’s views and insights engage events beyond the prison wall and these Ohio River hills. He is very aware of and in solidarity with the anti-racist mass movements literally filling the streets and highways in cities across the United States, provoked when police officers were given official impunity to kill unarmed Black men like young Mike Brown and Eric Garner. He also closely follows the current events in Mexico, where a countrywide movement demands justice for the 43 disappeared Ayotzinapa students.

On Dec. 13, 2001, Ramón Labañino was sentenced. As the thirteenth anniversary approached, I reviewed his statement to the court on that date in the face of what for some would have been a devastating life sentence plus 18 years. In the Ashland Federal Correctional Institution visitor’s room, it was the same optimistic, confident and firm man committed to saving lives and preventing terrorism who had 13 years ago made the following statement:

“Gentlemen of the prosecution, whether you like it or not, Cuba is an independent and sovereign country. It has its own legitimate government, its own president, its own martyrs and heroes, and its own convictions. Cuba is not different from the United States. And, gentlemen, Cuba must be respected!

“We know that efforts were made to ensure an impartial trial. But the city of Miami is not a place where goals like these can be achieved when it comes to Cuba. Perhaps that was the most critical error in our case: holding the trial in this city.

“If preventing the deaths of innocent human beings, defending our two countries from terrorism, and preventing a senseless invasion of Cuba is the reason I am being sentenced today, then, let that sentence be welcomed.

“I will wear the prison uniform with the same honor and pride with which a soldier wears his most prized insignia.

“This has been a political trial, therefore, we are political prisoners.

“All of the evidence is here; this is where history is written. And it is history that will do us true justice.”