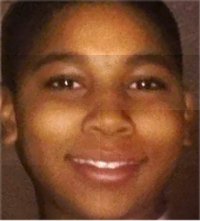 Dec. 8 — With the police killing of 12-year-old Tamir Rice on Nov. 22, Cleveland has become, like Ferguson and Staten Island, a particular place associated with a widespread systemic problem. The news of young Rice’s murder came out near the time of the grand jury decision not to indict Darren Wilson in the killing of Mike Brown in Ferguson.

In Cleveland, mass anger at the police erupted with the Ferguson announcement, with 500 mostly young protesters blocking traffic on Public Square and then on the interstate highway. For two weeks in a row Monday night marches on City Hall have been followed by demonstrations inside City Council chambers.

Rice was killed in broad daylight on a Saturday afternoon, in a park across from the city’s Cudell Recreation Center. The Cleveland Division of Police had received a call that a male was brandishing a gun in the park. The caller stated, in information reportedly not relayed to the officers called to the scene, that the gun might be fake and the individual was likely a juvenile.

Police tried to suppress the surveillance camera footage “out of respect for the family,” but Rice’s parents wanted it seen. Now the facts are widely known. Officers Timothy Loehmann and Frank Garmback drove up to Rice and before Garmback even stopped the car, Loehmann exited the vehicle and immediately fired two shots into the youth. The “gun” — a toy replica that shoots plastic pellets — was in the holster; Rice posed no threat to anyone. But once again, the CDP’s “pattern or practice” of excessive brutality sent a sixth-grader to an early grave.

It has since come to public light that Loehmann, a CDP rookie, had been forced to resign while working in the suburb of Independence, Ohio, because of his use of deadly force.

Police and elected officials are feeling the heat, not only over Rice’s murder but also that of Tanisha Anderson earlier in November. Her family called 911 three times for medical assistance related to Tanisha’s mental health, asking for an ambulance. Instead, police came and implemented a “takedown” maneuver, forcing Tanisha to the ground. She stopped breathing and was left outside in the cold until the ambulance arrived, at which point she was pronounced dead.

Rice’s killing was one week shy of the second anniversary of the killing of Malissa Williams and Timothy Russell. Over 100 police chased the two from the west side of Cleveland to the east side suburb of East Cleveland — outside their jurisdiction — while firing at the vehicle Russell was driving. Once they had the car stopped and surrounded, the cops fired 137 shots into the car, killing the unarmed pair. Police claimed they heard gunfire from the vehicle, but in fact the noise was the engine backfiring.

This double murder prompted the federal Department of Justice to conduct a 21-month investigation of the CDP. While Rice’s parents were burying their son, the DOJ released its scathing report, which has been widely reported. A key shortfall of the report is that it makes no mention of the racist nature of these and other killings of African-American residents. What is crystal clear, however, is that this is not a case of a few bad apples on the force.

The investigation uncovered a pattern of “unnecessary and excessive use of deadly force, including shootings and head strikes with impact weapons; the unnecessary, excessive, or retaliatory use of less lethal force, including tasers, chemical spray and fists; excessive force against persons who are mentally ill or in crisis, including cases where the officers were called exclusively for a welfare check; and the employment of poor and dangerous tactics that place officers in situations where avoidable force becomes inevitable and places officers and civilians at unnecessary risks.” The numerous cases of excessive force were deemed “in violation of the Fourth Amendment of the United States Constitution” which prohibits unreasonable search and seizure.

The few cases cited in the report are presented as typical rather than exceptional.  They include firing shots at fleeing suspects in moving vehicles and shooting at a crime victim fleeing a house where he had been held, as well as several cases where suspects were punched, tasered and pepper-sprayed even after being handcuffed. The report revealed culpability throughout the CDP; the pattern went all the way up the food chain, from officers to supervisors to the various investigatory bodies. The mayor-appointed civilian review board was deemed ineffective and even complicit.

The organizers of the recent protests are demanding that the CDP’s Internal Affairs Department and all of its bogus investigatory bodies, along with the current civilian review board, be disbanded. They want a new, elected review board. They want Loehmann and Garmback fired along with Safety Director Mike McGrath. They want the killers of Tamir and Tanisha indicted. They want what the DOJ found systematically lacking: accountability.

Young activists have organized themselves as the New Abolitionist Association. They are working in coalition with Peace in the Hood, Black on Black Crime Inc., Imperial Women, the Carl Stokes Brigade, Puncture the Silence, Workers World Party, the International Socialist Organization, the Guide to Kulchur Bookstore and others.

The new movement in Cleveland is “mostly young people, college age,” Donnie Pastard, a longtime Cleveland activist and member of the Carl Stokes Brigade, told Workers World. Her group is named for the first African-American mayor of a major U.S. city. “There is a new spirit of protest,” said Pastard.