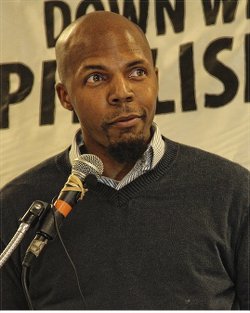 Taken from a talk given by Lamont Lilly at the Nov. 15-16 Workers World Party national conference.

In 1865, African captives were supposedly freed from the brutal bowels and vicious bondage of chattel slavery. In 2008, we were supposedly freed again when the term “post-racial” became a national trend. What our mainstream history books have forgotten to share with us is that African Americans were not freed in 1865. We were sold a façade that wasn’t even worth the damn receipt paper.

In the U.S. South, the Black Codes were enacted only one year after the Emancipation Proclamation. Aside from a few exceptions, African Americans were denied the rights to vote, to bear arms, to read, to write, to assemble in public, and to speak on political and social issues that pertained to their daily lives.

We were highly susceptible to illegal search and seizure at any time — be they paddyrollers, state militia or the slave patrol. However, in spite of such systematic restrictions, the Black masses have always found a way to resist and somehow carry on.

In the city of Wilmington, North Carolina (just three decades removed from the iron shackles of chattel slavery), African Americans had established their own churches, schools and community collectives — their own newspaper, elected officials and a thriving Black working class. Progress had indeed been made. That is not to say that conditions were not still difficult, but at least families could be whole again. With this general backdrop in mind, racists, white supremacists, and the most evil capitalists you could ever imagine tightened their belts.

In 1898, the city of Wilmington, a marker of Black progress, was forever changed when racist terror mobs conducted a two-day coup d’état — ousting locally elected Black officials and exiling the African-American community from their own homes and businesses.

Once a character reserved for racist ridicule, “Jumpin’ Jim Crow” became the Jim Crow laws. “Separate and unequal” became a federal mandate. And by the way, “federal” means the North and the South. While the Ku Klux Klan raised hell in Georgia and Alabama, in the North it was employment discrimination, predatory lending, police brutality and intentional confinement to the urban ghettoes. They wouldn’t lynch in Harlem, Philadelphia and Detroit. They would simply make life so difficult that you wished you were dead.

This is the history the youth in Ferguson wear on their backs like winter coats. When I was there last month for the Weekend of Resistance, they talked about the long-suffering of the Montgomery Bus Boycott — the commitment of 365 days of walking to work in the hot sun and wet rain. Today marks 99 days of the Ferguson rebellion, and the organizers there are very proud of that.

There were two things that absolutely amazed me in Ferguson. If I had not been honored to see them with my own eyes, I would not have believed it.

The first key factor was Ferguson’s sense of urgency. When 18-year-old Michael Brown was shot down, the people moved immediately. When I say the people, I’m talking about St. Louis and Ferguson’s most oppressed communities — the “thugs,” the unemployed, the marginalized, the low-wage and fast-food workers.

They took it upon themselves to seize the moment, every minute, every second, every hour. And they are still there, every day. Some of the youth in Ferguson even withdrew from their college courses (mid-semester) so they could organize full time.  I‘ve seen them in action, comrades; they don’t take any days off. Now, that’s revolution!

As comrade Fred Goldstein said, when revolution becomes your flesh and bone and every breath — when resistance and fighting back becomes the very existence of who you are — that’s revolution.

The second factor that amazed me was their level of revolutionary organization. Contrary to public belief, the Ferguson Rebellion was, and still is, highly organized. The protests that are taking place throughout the Ferguson and St. Louis area aren’t just random demonstrations; they are well-executed strategies of making the comfortable uncomfortable.

No, the protesters there don’t have any tanks and tear gas; yet they are disrupting traffic. They’re showing up (or shall I say “turning up”) at symphonies and professional sporting events. They’re even protesting at malls now, and we know how the capitalists don’t like that. This kind of work requires true organization.

I witnessed first-hand how organizers took over an entire block, directed traffic, provided medical care, fed the hungry and looked after small children, all while protesting. They had constant lines of communication via text and social media.

They had scouts who were scanning police radios and watching for police snipers from the roof. It reminded me of my time in the army. It is a well-oiled machine, except they were fighting for the oppressed.

Ferguson is the real deal, comrades, and we must support it. This rebellion has inspired the oppressed all over whole world. The revolution is already here. If you didn’t know, you better ask somebody.