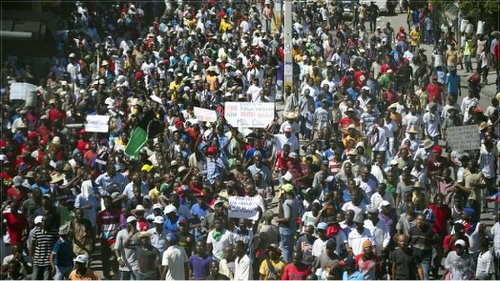 Most of them live without electricity. Or phone service. Their community groups and popular parties don’t have much of either. They spread the call to demonstrate mouth-to-mouth or by radio shows. Internet with a mass reach doesn’t exist.

But what the people of Haiti do have is mass anger. Anger at their government, which was imposed on them by the direct intervention of then Secretary of State Hillary Clinton. Anger at Minustah, the U.N.’s occupation force that has been propping up their government for the last 10 years, while introducing a cholera epidemic that has killed over 8,000 Haitians and sickened over half a million.

On Nov. 26, they came out by the tens of thousands into the streets of the capital city, Port-au-Prince, even though a week earlier the cops had broken up a demonstration there with tear gas and live fire, killing two protesters and sending five to the hospital. They called their protest “Operation Burkina Faso,” after the recent successful mass uprising in West Africa.

They made it absolutely clear that the only step President Michel Martelly and Prime Minister Laurent Lamothe could take to satisfy their demands would be to resign.