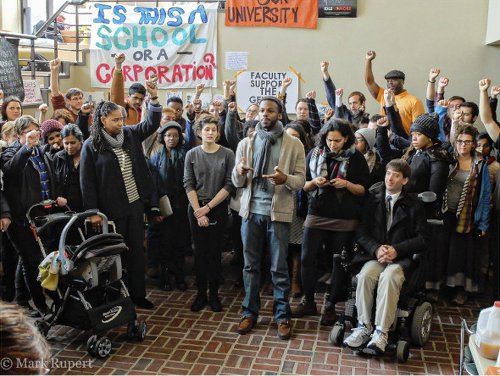 Syracuse, N.Y. — On Day 18 of the student sit-in at Syracuse University’s administration building, “THE General Body,” a united front of student groups, announced they were closing the occupation in order to move to Phase II of organizing against the corporate takeover of their school. (thegeneralbody.org)

In a press conference, student spokespeople said: “We will not submit!” They emphasized their fight was for “the life and death needs” of all 21,000 students at the university. Their core demands included support for students of color; women; lesbian, gay, bisexual and transgender people; and students with disabilities, and also included support for the struggle for a healthy environment and planet.

Students are now forming a coalition with SU staff and faculty, both unionized and nonunionized, to win their demands from the administration.

The new chancellor of Syracuse University, Kent Syverud, has cut programs for women and people who have been raped or sexually harassed; cut programs for low-income students and students of color; and cut services for students with physical and mental disabilities.

Syverud, a lawyer, was one of two trustees named by British Petroleum to administer the $20 billion Deepwater Horizon Oil Spill Trust. Set up by BP, the trust was supposed to meet claims from the BP drilling platform explosion in April 2010, which caused catastrophic damage in the Gulf of Mexico.  Four years later, BP has cleaned up less than one-third of the spill, and many people in the region, most in need of help, have received no or token compensation. (New York Times, Oct. 29)

Support for students has been growing from alumni, parents and the local community. THE General Body received messages of support from 1199 SEIU, United Healthcare Workers East and Adjuncts United, and from students at other universities across the country, including Colgate, where students mounted a five-day sit-in earlier in the fall.

THE General Body issued a statement of solidarity “with the national protests proclaiming #BlackLivesMatter” in the wake of the Ferguson grand jury decision not to indict the white officer who killed Mike Brown, an unarmed Black teenager.

On Nov. 20, students, teachers and staff marched together out of the administration building, chanting: “The people united will never be defeated! ¡El pueblo unido jamás será vencido!”